Another partial build for you to ruminate on. 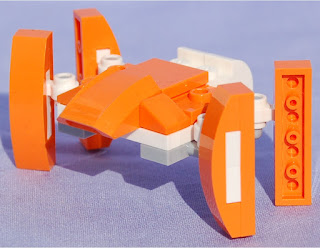 Another variant on my faithful Crab Mecha.  This time I'm thinking of using a different piece as the head and making the usual head piece into some sort of underslung "stinger".

Toys'n'Bricks discussion thread.
Posted by Mantisking at 6:49 AM No comments:

Here's another installment of non-human frames. 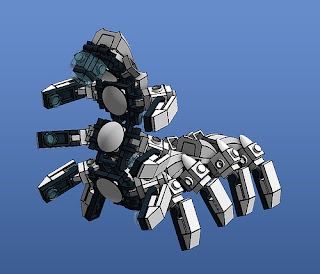 Here's the only thing that could compete with that, the Tiamat by NimbusConflict. 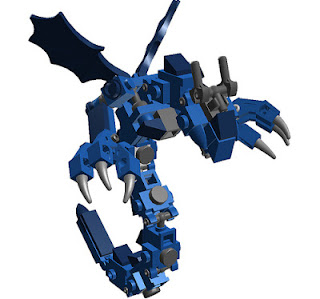 I'd like to see both "in the brick" at some point though.
Posted by Mantisking at 6:58 AM 1 comment:

There have been mentions in different places I frequent of the Kickstarter for The BrickStop.com.  It seems a group of programmers are seeking to build a new website that will compete with Bricklink.  It'll be interesting to see if that happens and what changes this may bring about.
Posted by Mantisking at 6:50 AM No comments:

Over the past few weeks, I've managed to do a little discount shopping for Lego.

Posted by Mantisking at 6:54 AM No comments:

I finally got the chance, and nice enough weather, to step outside and take some pictures.  You may recognize the top half from here.

Here's the Flickr page.  There's a link there to the Brickshelf gallery.  There's also a discussion thread on the Hangar.

Posted by Mantisking at 6:41 AM No comments:

The Price of Lego 2

After reading Andrew Seilen's blog post comparing the price of Lego over the last 20 years or so, I decided to take a look at pricing myself.  Not in the mood to do a ton of work even though there was a blizzard outside I figured using two new lines released in 2013 would be easiest.  The Galaxy Squad and Teenage Mutant Ninja Turtles lines have a similar number of sets and would also allow me to compare licensed versus regular sets.

Hopefully you can read the columns as they're set up.  And before you complain, I only run "Price per Piece" out two digits because you can't pay less than a penny for something.  Anyway.

That's some interesting information right there.  Admittedly this is a small sample size. Depending on which set of statistics you use the Price per Piece comparison is either the same or fairly close.  Of course this falls prey to the same thing that the original blog post did -- the Law of Averages.  Given a wide enough range and enough data points, any set of information can be made to look reasonable.  It's only when you start to look at individual data points when things stand out and you go, "Hey, wait."  I think what I find the most interesting is the difference in how Brickset and Bricklink treat piece counts.  Brickset includes minifigs in that total -- just like Lego -- and Bricklink doesn't.  I prefer the Bricklink version more.  Because, unless you are the type to disassemble minifigs and use the parts in Microscale building, minifigs are going to sit on the side unused.  Another interesting point is how many pieces you lose to minifigs depending on the set.
Posted by Mantisking at 11:59 AM No comments:

Email ThisBlogThis!Share to TwitterShare to FacebookShare to Pinterest
Labels: Shopping, The Price of Lego

Here's a few shots of another project I'm working on.  Hopefully I'll have it done by the time PAX East rolls around.


I've got a squad of my RE-4 frames sitting around without any weapons or other attachments.  Time to kit them out.

Toys'n'Bricks discussion thread.
Posted by Mantisking at 6:55 AM No comments:

A thought occured to me while I was using the Kre-O sets to build a few mechs.  Lets take a look at how parts compare between the two block systems.

In this first picture you can see a side by side comparison of similar blocks.  The first difference you can see is the one between the colors.  The second is the design difference between some of the pieces.  Overall, if you know what you're looking for, you can see the differences but, to the "untrained" eye there is not much difference. 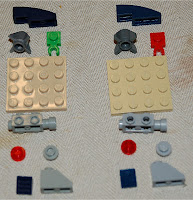 This picture contains parts that are not duplicates of Lego parts.  Well, the upper right and lower right pieces are similar to Lego pieces but I thought they were different enough to include here.  The top right corner piece is similar to the standard Lego dome piece, just a little shorter.  The one on the lower right is similar to the Minifig Utensil, Handlebars.

The modified 1x1 round brick that looks like a gun muzzle has already seen a lot of use.  The one beside it on the left could be useful as an "underslung grenade launcher" on a gun or maybe as some sort of "heating/cooling unit" on the roof of a microscale building.  The middle piece on the right -- the brick with two clips on it -- has a lot of SNOT potential.  The most interesting of these pieces in terms of sheer building utility is the double male connector in the top row.

After buying the set these parts came from I'm really tempted to buy more and see just what I can accomplish with a greater selection of them.
Posted by Mantisking at 9:18 AM No comments:

I realize these are all renders but they look like a good source of inspiration. 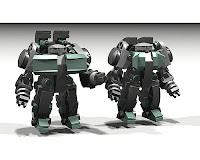 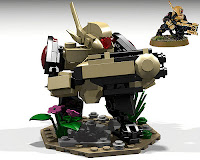 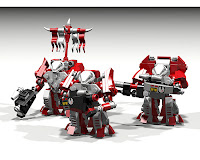 Doctor Where. The Daleks in this picture would make good frames for MFZ. 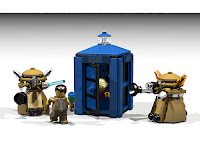 Unfortunately, Brothers Brick beat me to the punch.
Posted by Mantisking at 6:53 AM No comments: