Back in May of 2014 on the G+ group, Kevin S. tried to respark a challenge that darksyntax created.  I've been meaning to give it a try and I finally got around to it.  Except mine has a bit of a twist.

Darksyntax recently posted these brilliant builds made from a SPaBCC.  I saw them and figured they'd be perfect for a friend of mine that recently got into the game and was looking to build their first squad.  I also had a thought that if you add the parts from 41549 Mixel Gurggle  that you could add some articulation to the original build.  Looking at the inventory for Mixel Gurggle, and the picture of the pile of parts darksyntax posted on the Hangar, I put together a proof of concept build from the parts I had available -- not caring about the colors. 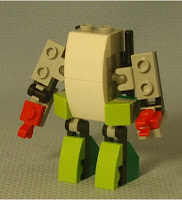 This is my initial design.  It's a little short and the arms impact a little too much
on the hips for my liking.  I like and it though and it proves my initial idea is solid.

So I went out to my local Lego store and bought the parts for this challenge.

Here are the parts I chose from the Pick-A-Brick wall. 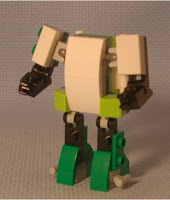 So that's what I had to work with.


My next version involved lengthening the legs and moving the shoulders up
so they didn't impact the hips so much.  I also made the torso a little thicker. 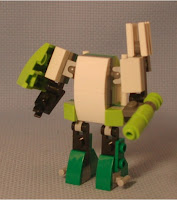 Adding attachments to it, I came up with a Direct Fire
Attachment (2Rd), a Defensive Att. (1B), and Spotting Att. (1Y).
There's a Movement Attachment (1G) you can't see on the back. 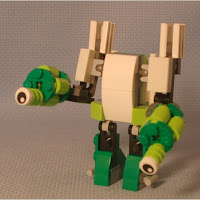 Then once more for a 2Ra+d8/2Y/2W loadout.  I made a point of using
the same pieces for the same Attachments across multiple builds.

After I put together five Frames, I moved on to Stations.  I built an Eternal
Flame, an Abstract DNA Sculpture, and some sort of Comm Station.

After I built Stations I used the leftover pieces to make
a couple of Terrain pieces.  Each one can take 4 hits.

So all of this cost me $8.99 for the Small Pick-A-Brick cup and $4.99 (x5) for the Mixel Gurggle sets, for a total of $33.94 -- plus tax because I live in a state that has Sales Tax.  I figure that's a reasonable price for a working squad of Frames, Stations, plus a few pieces of Terrain.

Posted by Mantisking at 7:06 AM No comments:

For the last review of the Kre-O "transforming" Transformers week, let's look at the Optimus Prime versus Megatron kit. 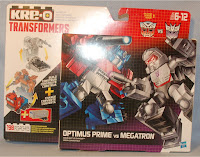 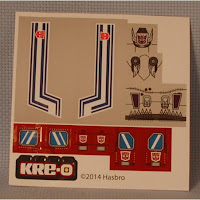 Parts 1.  Some interesting 2x2x2 Bricks w/4 Studs on 1 Side there, otherwise it's just a bunch of Plates, Tires, Rims, and a Brick. 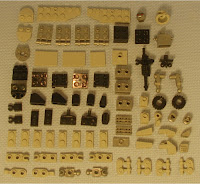 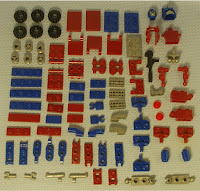 
Parts 3.  Kreon parts in the upper right corner.  Dark Red this time instead of Red for a 2nd Optimus variant.  Plenty of Plates, Tiles, Tires, Rims, Bar Plates, Clip Plates and Slopes, along with Kre-O Ball Joints.  There's also a couple of Bar Clips, and that funky 1x1 Round Plate w/ Vertical Bar. 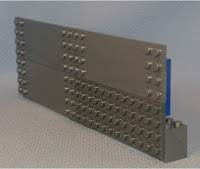 Build 1.  A Wall, it'll take two hits before being reduced to non-Cover.

Build 2.  A fairly standard Frame,
a little on the tall side.

For the penultimate review of the Kre-O "transforming" Transformers sets, let's look at the Optimus Prime solo kit. 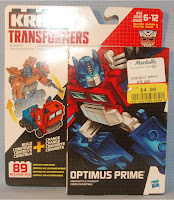 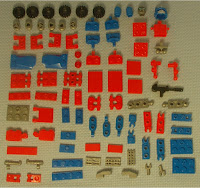 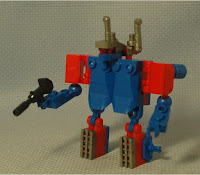 Parts.  Plenty of Red and Blue.  Kreon pieces in the upper right corner.  Plenty of Clip Plates and Bar Plates, a handful of Plates, Tiles, Tires, Rims, and 2x1 Modified Plates w/Axle, a couple of 1x1 Round Bricks, Bar Clips, and Studless Slopes.  Also a couple of 1x2 Modified Technic Bricks w/Bar (closed ends).  One Flag and a Kreon-scale gun.

Build.  A relatively normal looking mech this time around, 2Rd/2B/1Y/2W. 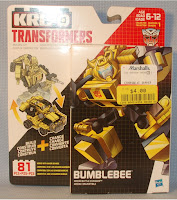 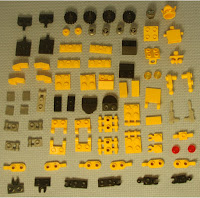 Parts.  Plenty of Yellow in this one.  Kreon parts in the upper right corner.  Lots of Bar Plates and Clip Plates, a fair amount of Slope pieces, a handful of Tires and Rims, some Plates and Tiles, and a few Kre-O Ball Joints. 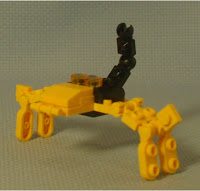 As I've managed to track down more of the Kre-O "transforming" Transformers sets, let's review them. 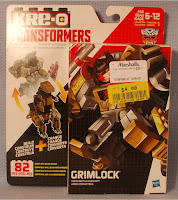 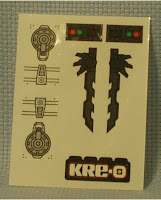 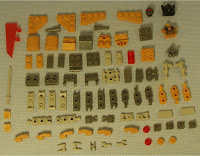 Parts.  That's a fair amount of Gold in that there box.  Kreon parts on are along the upper right side.  Plenty of Clip Plates and Bar Plates, a fair amount of Slopes -- regular, Inverted, and Studless -- a couple of Bar Clips, a handful of Wedge Plates, and a couple of 1x2 Bricks w/Studs on 1 Side. 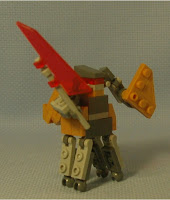 Battle Report: The Anatomy of Another Demo Game

This is what the table looked like at the start of the game.  My forces are on the right side of the board.

Events of Turn 1 (DDC@7):  Both of us jockey for position, and a few attacks are launched but nothing lands.

Events of Turn 2 (DDC@6): Rusty's Chub #1 rushes forward and seizes the center Station.  My Green Archetype hits it for 1 damage. 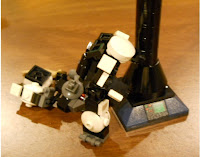 Here's a few pictures of Rusty's Chub #1, the Survivor.

Well, that's a long title for a small set.  :-)  This was a "free giveaway" at Target several weeks ago. 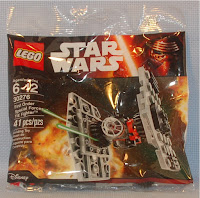 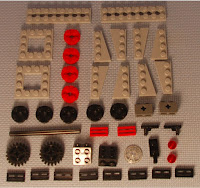 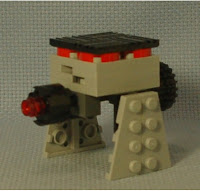 For the first game of the year we met at a new location, the Connector Cafe, after hours for another five player throwdown.

Occam's Spork was selected to be Primary Attacker by lowest dice roll.

Events of Turn 1 (DDC@11): Mostly movement and jockeying for position this turn.  Stevenik and Occam's Spork make some moves towards my position.

Events of Turn 2 (DDC@7): Ouch.  Stevenik seizes my Station after someone destroys the Frame guarding it.  I manage to destroy one of Narbey's Frames.  I lose another Frame trying to capture Narbey's Station.

Posted by Mantisking at 7:30 AM No comments: