Here's the promised second half.

Part 1, in case you missed it.
Posted by Mantisking at 7:00 AM No comments:

Since we're three weeks into the new year -- and I finally got my new catalog -- let's take a look at some of the sets that might be good for MFZ.

75078 Star Wars Imperial Troop Transport.  141 Pieces for $12.99.  The minifigs are useless but the main build should be possible to tighten up the main build into an IO Frigate.

I've got more sets on my list, so I'll drop Part 2 later this week.
Posted by Mantisking at 6:55 AM 5 comments:

Another 20% off coupon on Clearance merchandise from TRU.  Just a guess, but I think they're going to keep these up until the end of the Clearance Blast.  This one expires 1/31.  Here's a link to all the Clearance Building sets at Toys'R'Us.

Here are the Sales/Clearance sets for the week at Target.

Maybe I should make this a weekly Tuesday post.
Posted by Mantisking at 8:41 AM No comments:

Five more mecha for your morning -- or whenever you happen to be viewing this -- enjoyment.

Cockroach by Max.  Fantastic use
of the windscreen in this one. 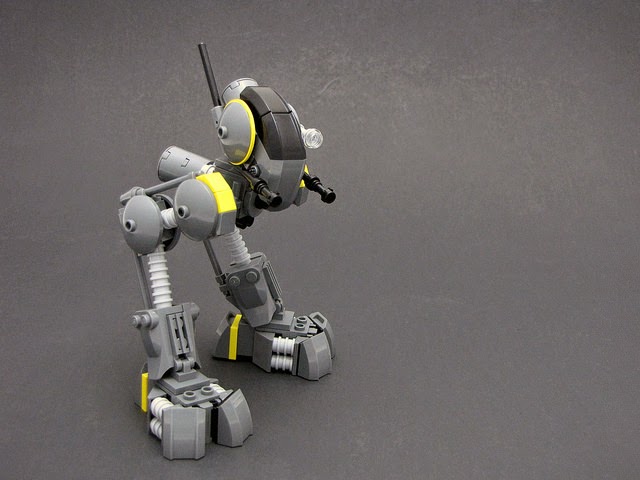 BOOTS by cmaddison.  This looks a little large
overall, but it's just too fun to not include.

LX-04 Anti Infantry Crawler by Rancorbait.  Render.
There are some interesting techniques being used here. 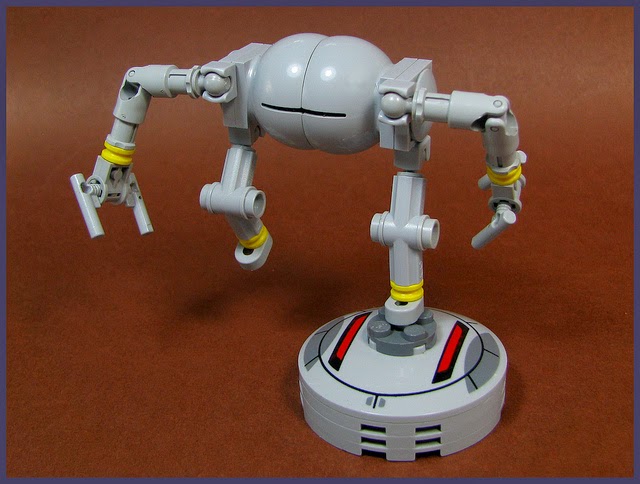 Ma.K Buttcheeks by Karf Oohlu.  Don't let the irreverent
name fool you, this is a neat design.
Posted by Mantisking at 6:53 AM No comments:

Here's the last Orange Mixel of Series 2 and the last overall of the series. 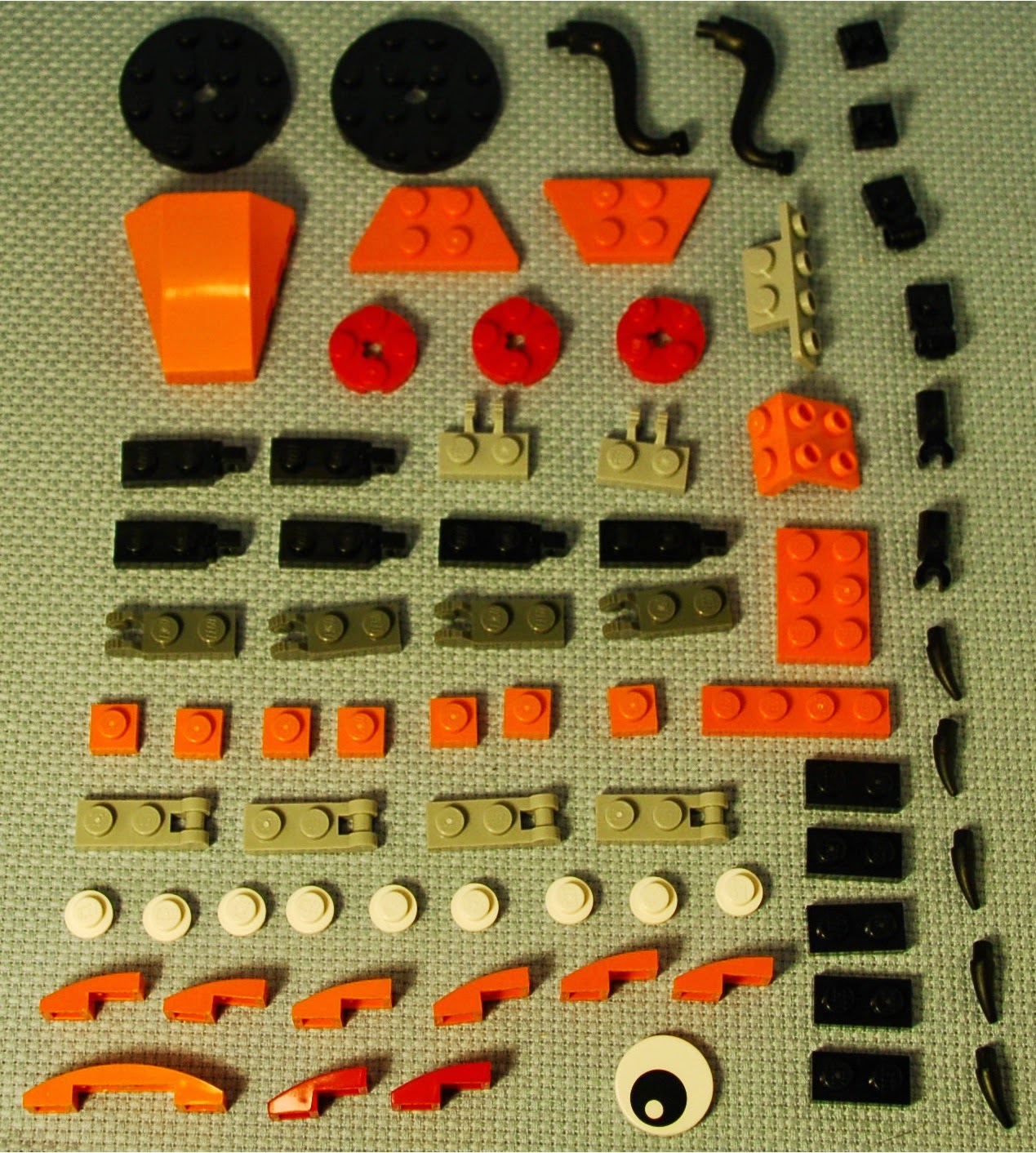 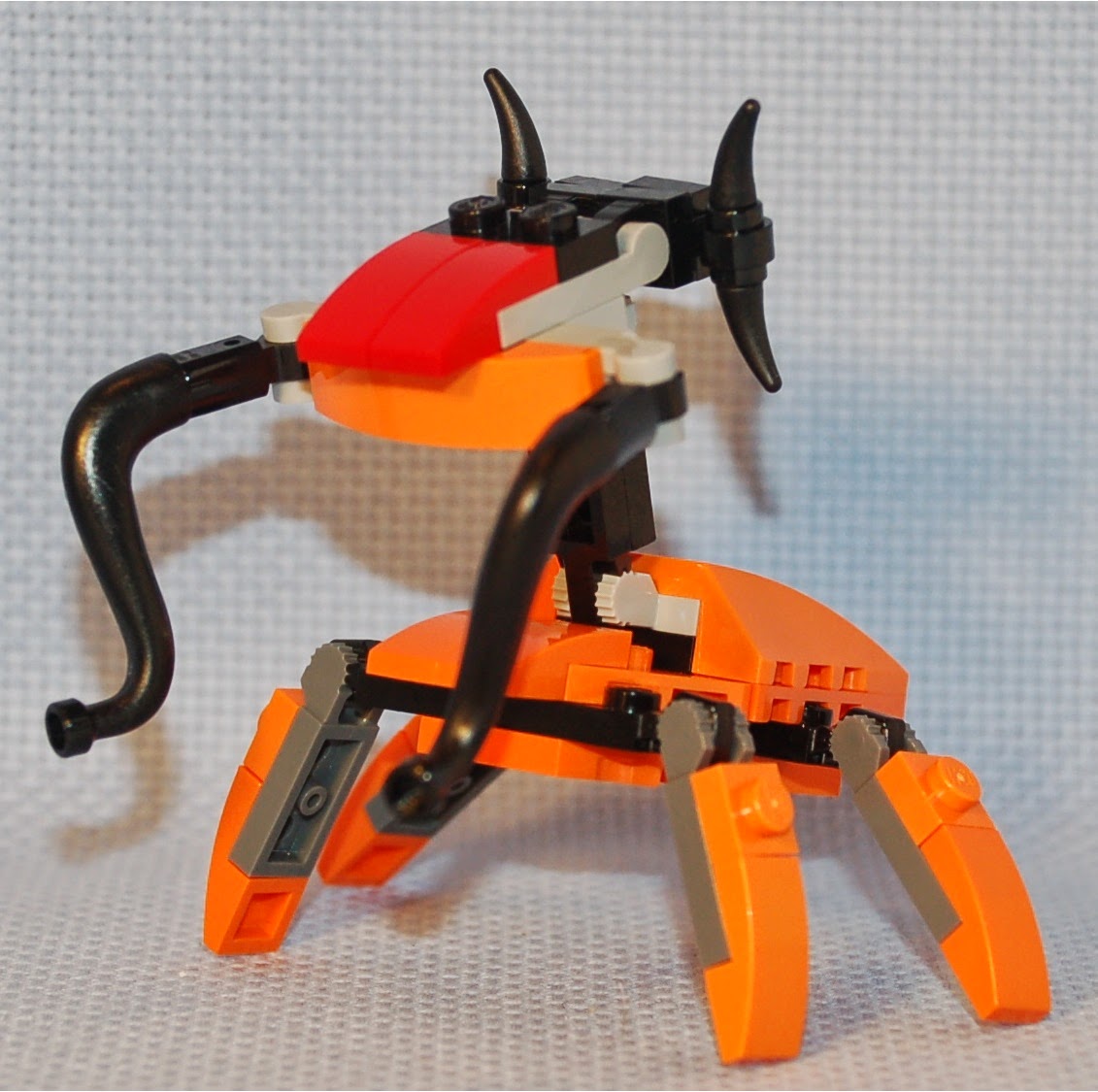 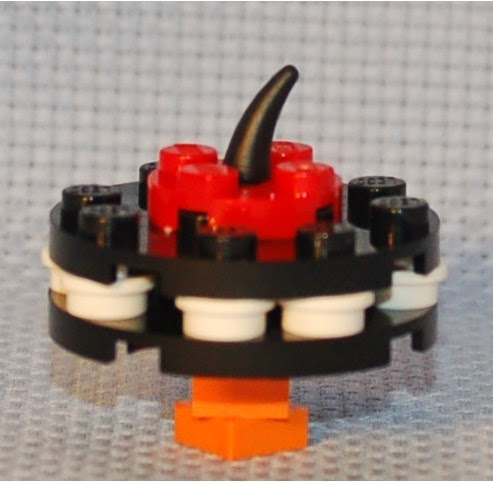 Build.  Insectaur frame.  I think this is my favorite build from among all the ones I've created from the Series 2 Mixels.


I also managed small Station from some of the remaining parts.

The last of the Blue Mixels of Series 2. 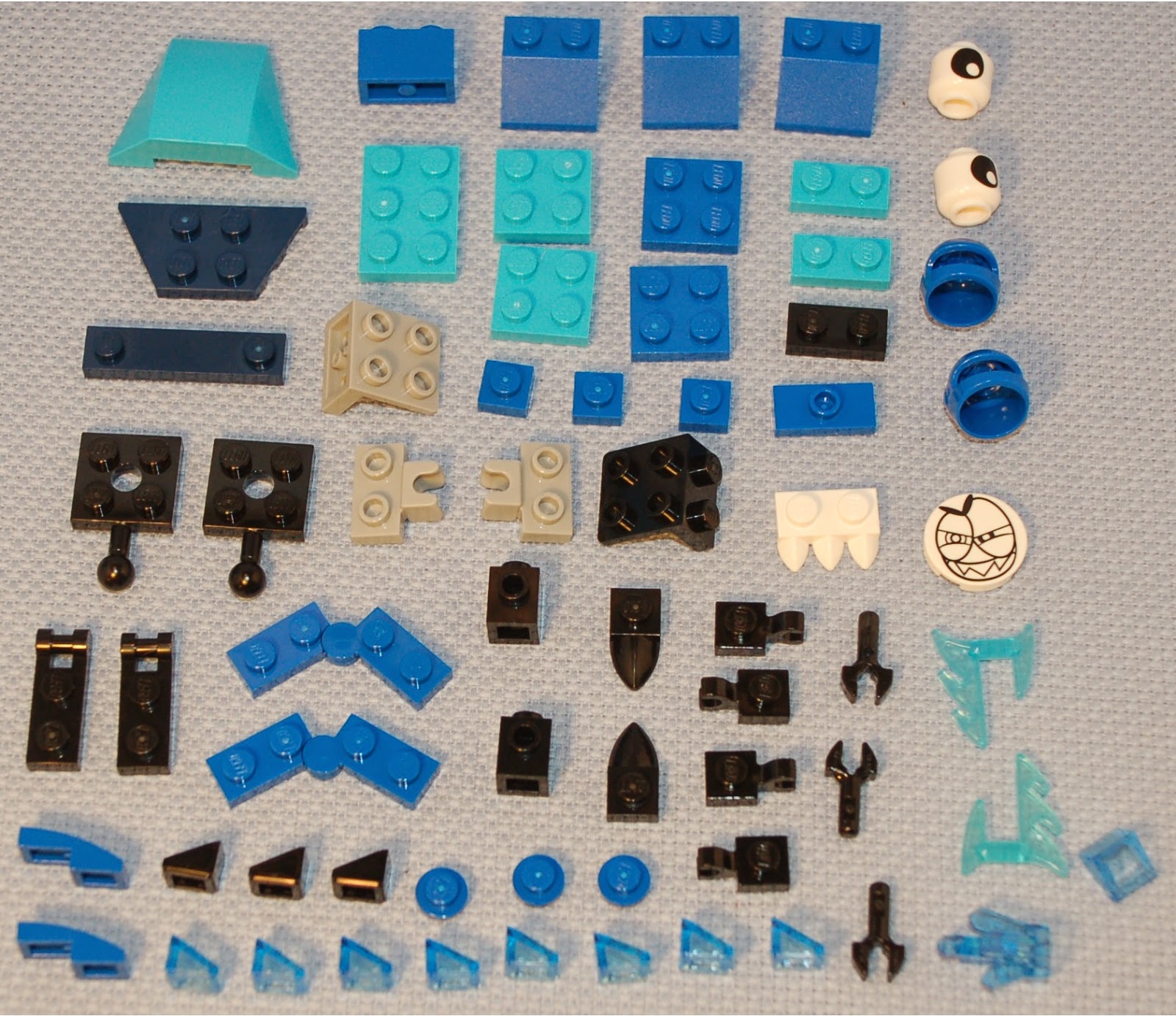 Parts.  Plenty of Cheese Slopes, a couple of 1x4 Hinge Plates, a few Bar Claws, some Mixel Joints, two new Headlight Bricks, a handful of Clip Plate, Horizontal, some plates, some slopes, some brackets, a couple of those funky Alien Galaxy Squad pistols, and a few other parts.

Another 20% off coupon on Clearance merchandise from TRU.  They are seriously trying to wipe me out.  This one expires 1/24.  Here's a link to all the Clearance Building sets at Toys'R'Us.

This is the only set I found in the Target online Clearance listings.

Here's Walmart's online Clearance/Rollback selection.
Posted by Mantisking at 6:49 AM No comments: 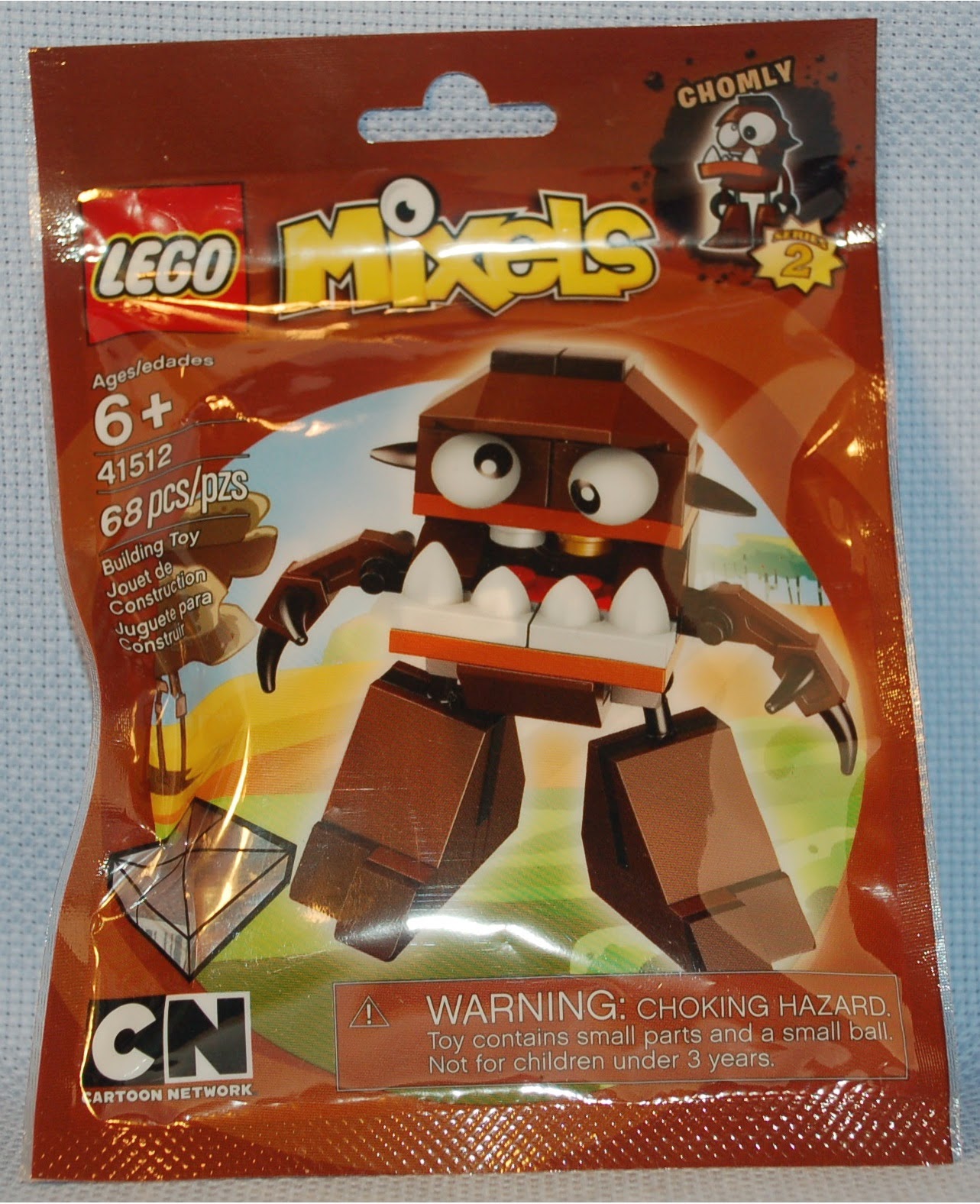 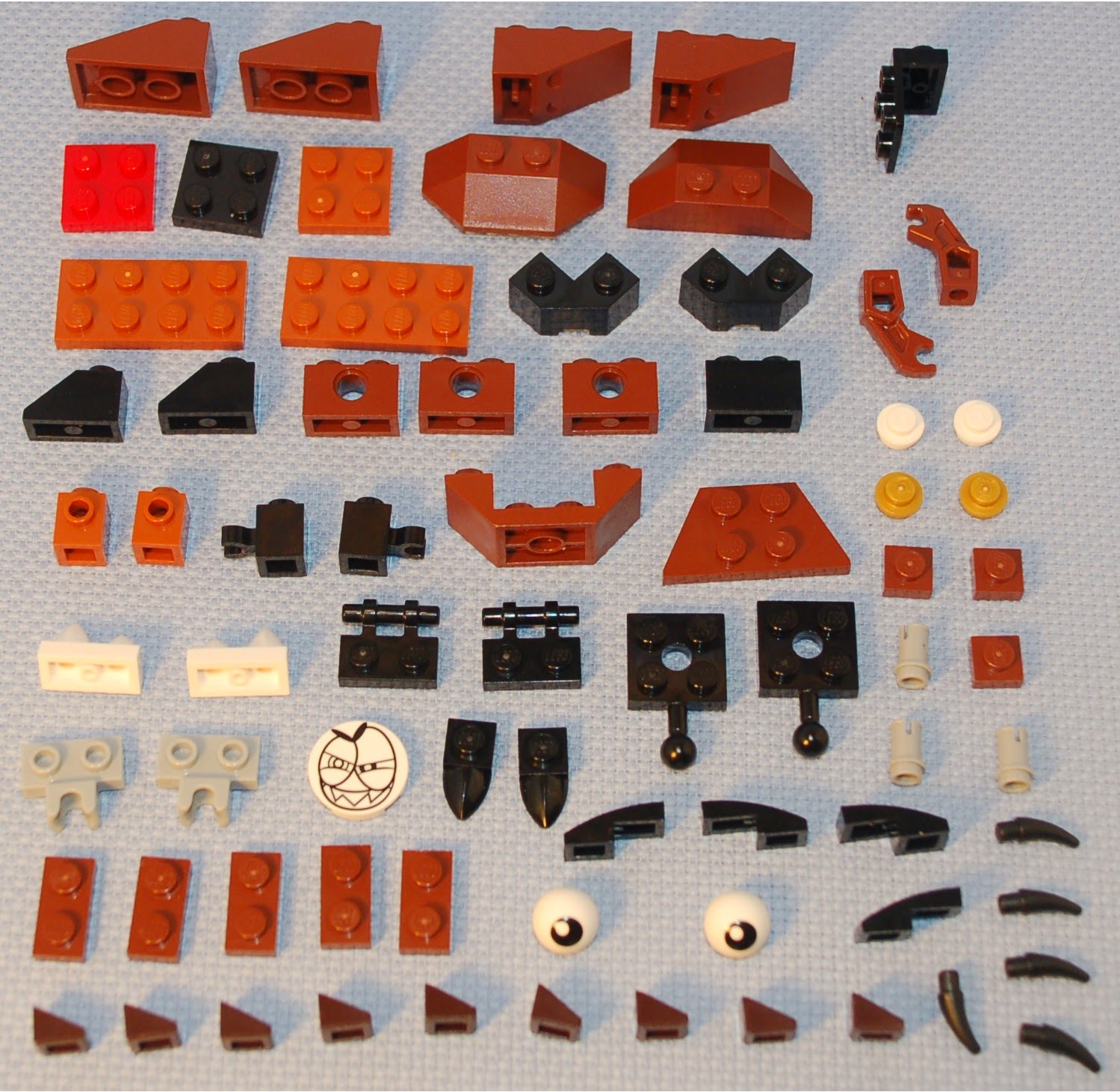 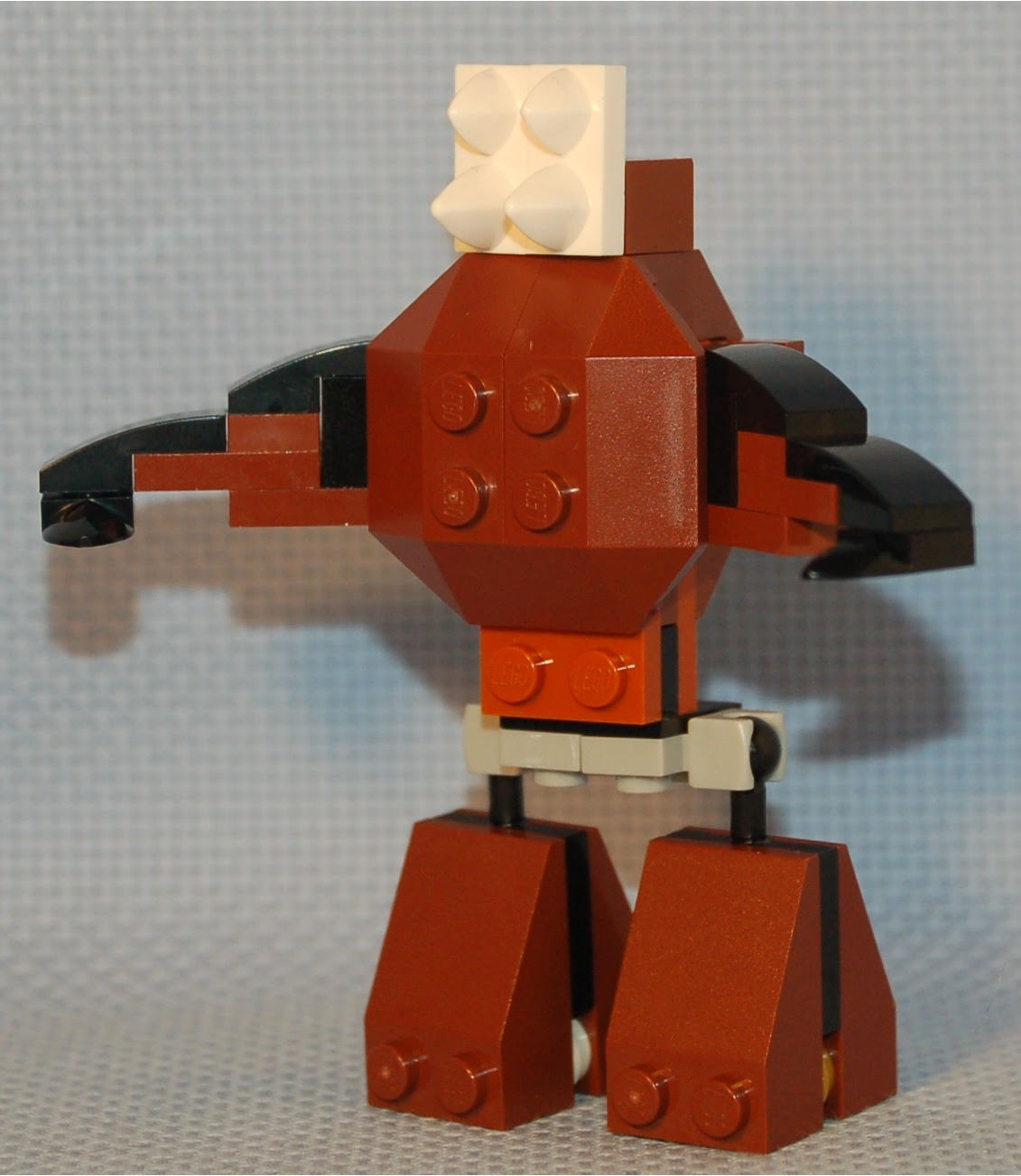 Build.  This one didn't really
flow for me, but I got it done.

Here's the second of the Brown Mixels from Series 2. 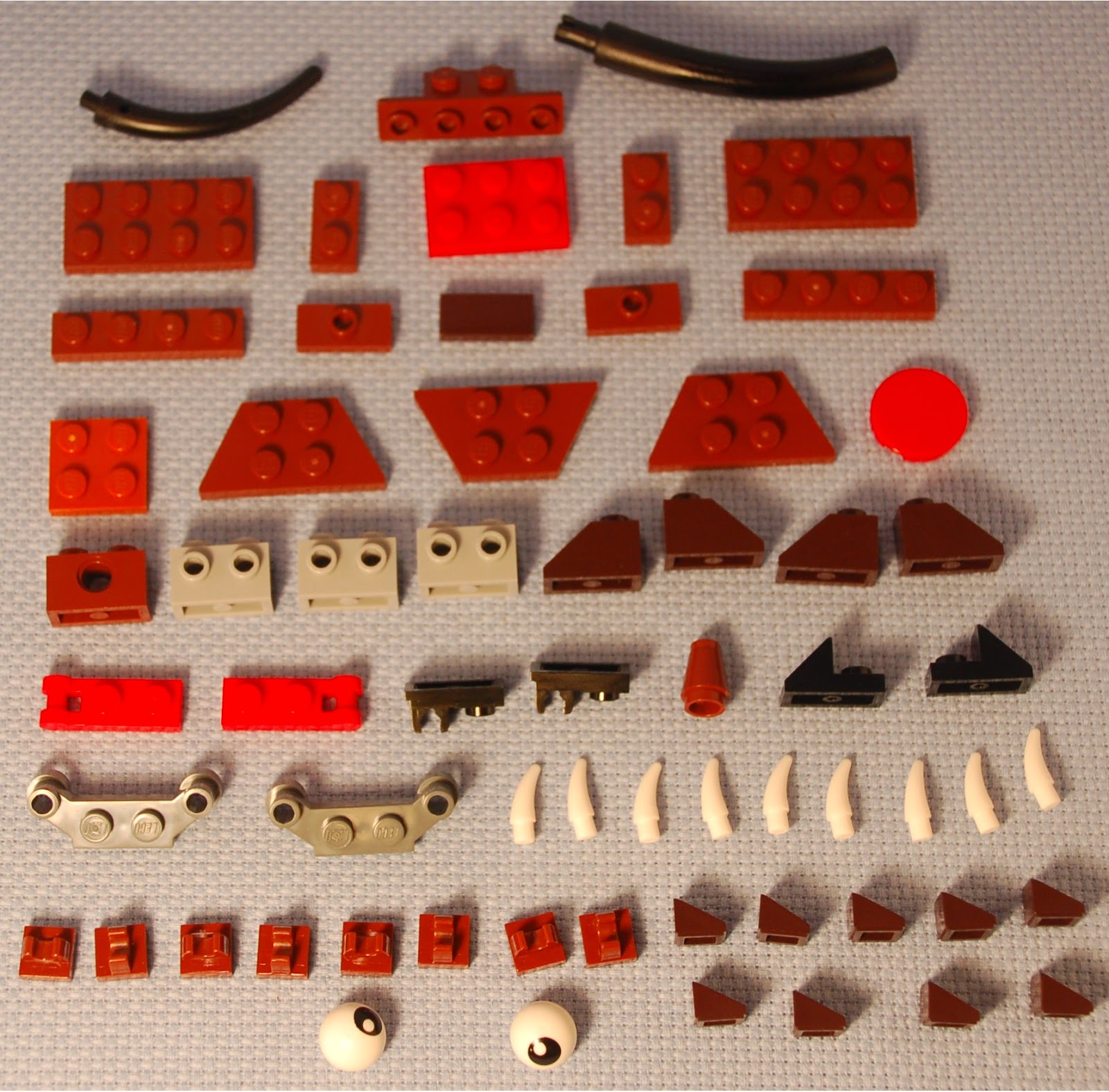 Parts.  A handful of plates, a bunch of Clip Tiles and Cheese Slopes, a few of those 1x2 Bricks w/2 Studs on 1 Side, 1x2 Clip Plates (vertical), 1x2 Plate wBar (closed ends), a Technic Brick, and two 1x4 Plate w/Offset Ends, 1x2 Slope Bricks, and Cheese Slope w/Plate are what I see for interestiing parts.

Build.  This set made me work for it.  I
tried to build a Frame from the start
but it wasn't happening.  I eventually
switched up to an IO Frigate then
went back and made a Frame. 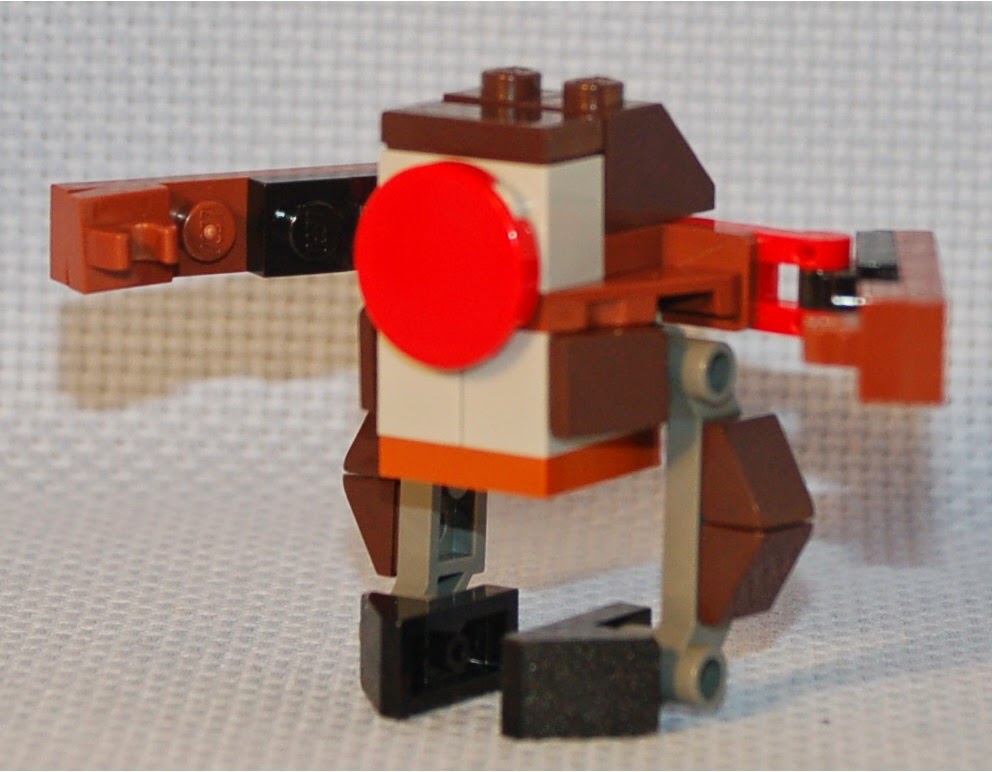 Here's the frame.  It's obviously 4P.  I think it kind of looks like a Minion from the "Despicable Me" movies.

The Questions:
Can you build something -- a frame, station, or starship -- right away?  Yes.  (+5)Is it below, at, or above the golden ratio?  Below.  (+5)  (The Golden Ratio is $0.10 per part.)
If you can't build a frame right away, or choose not to, does it have parts you should be able to put into use right away?  Yes.  (+5)
Does it have more than a handful of immediately useful parts?  No.  (-5)
Score: +10 (A-).  While it does have a fair amount of Clip Tiles and Cheese Slopes, they're all in varying shades of brown and there aren't plentiful quantities of other useful pieces.
Posted by Mantisking at 6:45 AM No comments:

The third installment of the MFZ Google Hangout is scheduled for Saturday, January 17th from 3:30pm to 5:30pm (Eastern).  The main topic of discussion will be the most recent Intercept Orbit update.  I'm sure that will not be the only thing we talk about though.  Dark Cloud Blogs will, once again, be the host, and I and several others will be attending.  We hope to see you there.
Posted by Mantisking at 7:01 AM No comments:

This is the second of the blue Mixel sets for Series 2. 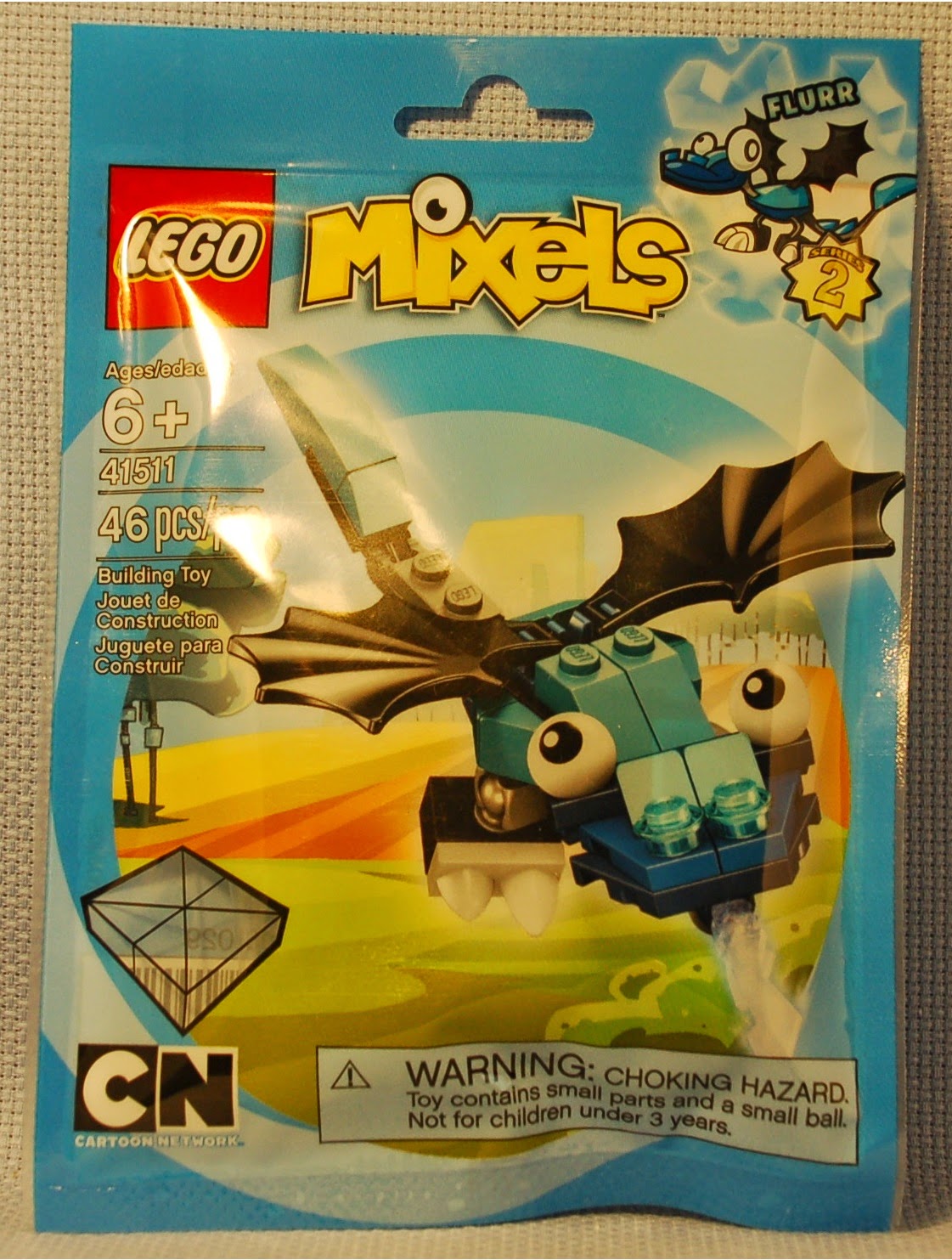 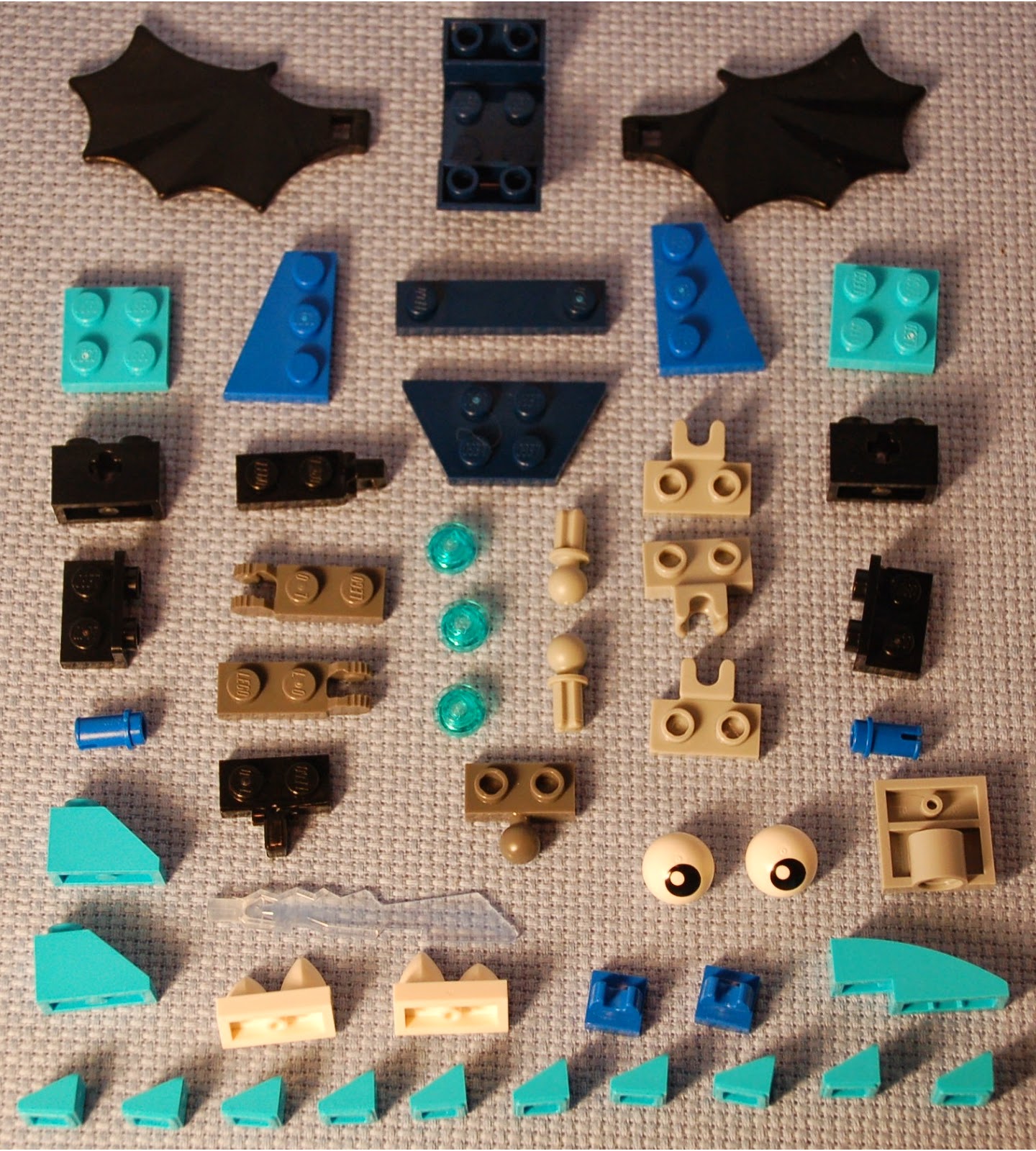 Parts.  A handful of Mixel joints and click hinges along with a generous handful of Cheese Slopes start us out.  The lightning bolt piece, bat wings, Technic Bricks w/Axle Hole, Clip Tiles, Tooth Tiles, and 1x2-1x2 brackets finish us out.  Not really too much here.

Build.  We've got a bit of a
Kaiju feel with this frame.

Toys'R'Us has another 20% off Clearance coupon available this week.  Luckily I found out about it early on.  It ends on Saturday (1/17).  Here's a link to all the Clearance Building sets at Toys'R'Us.  Good hunting!
Posted by Mantisking at 6:54 AM No comments:

This is a good one to start up with after a two week break from reviewing the Series 2 Mixel sets. {insert baseball reference here}. 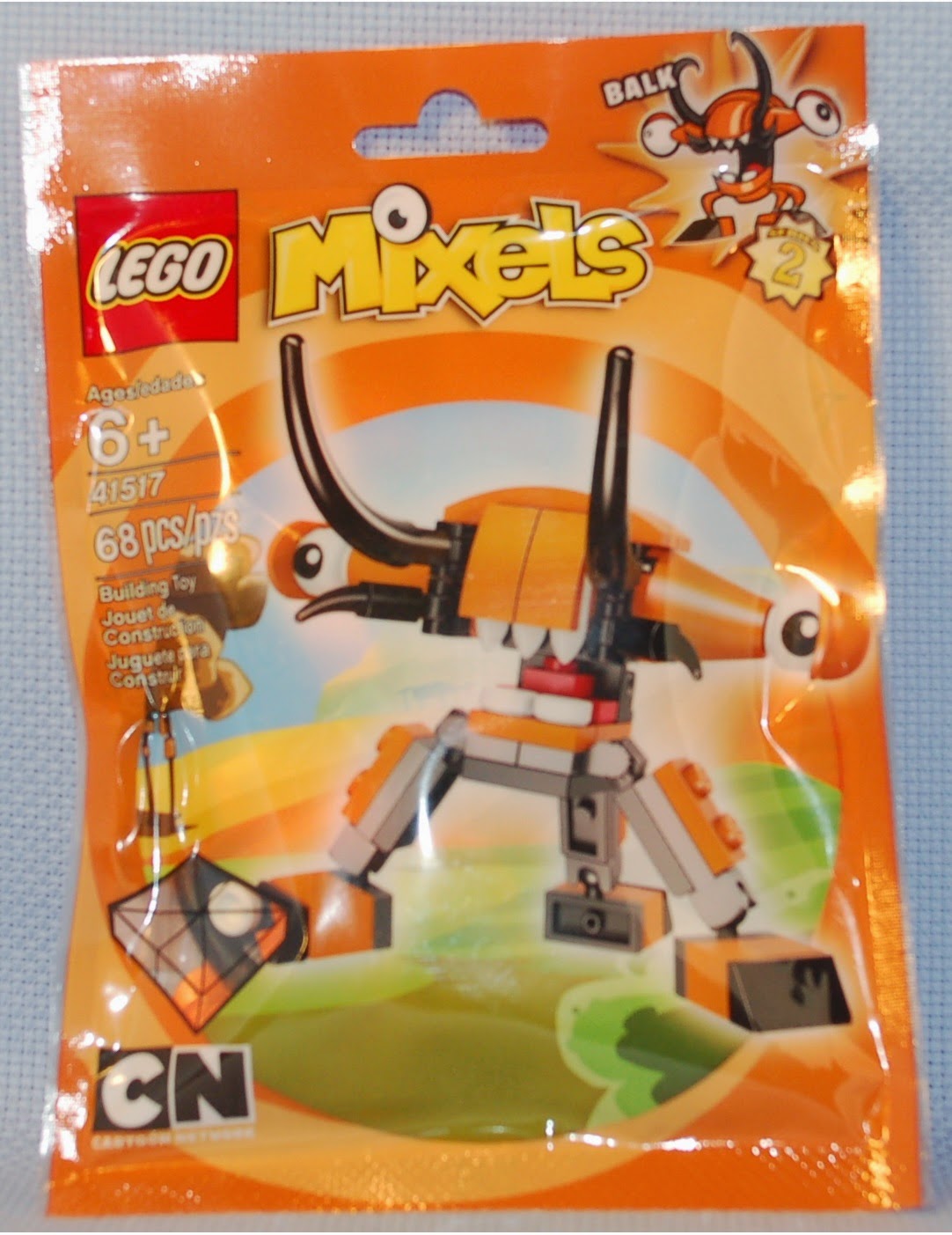 Build.  This frame looks like
something from Battletech got
some sort of Cthuloid infection.

For some reason the instruction page for Scramblers/Striders does not appear in my top ten visited of all time posts.  Is this because it's easier to build than any of the other designs, or because people don't like it?  Anyway.  I figured maybe this frame deserved another look. 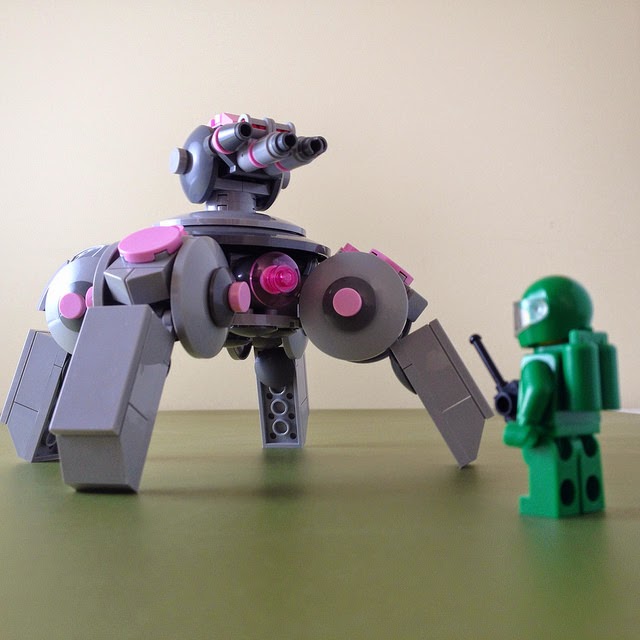 Minifig Scale Scrambler by MRaichelson.  There's been some
controversy over minifig scale creations, but this looks great. 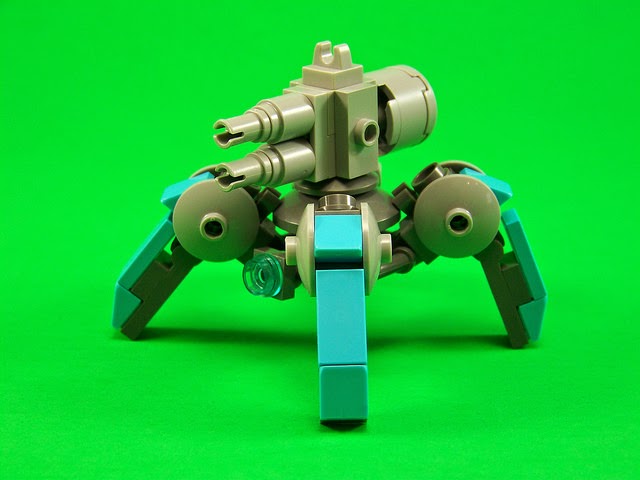 Scrambler by A. Yates Industrials.  This one features
A. Yates typically excellent use of color blocking.

Scrambler V2 Company by Ced23Ric.  This squad features
excellent use of stickers, color, and non-typical parts. 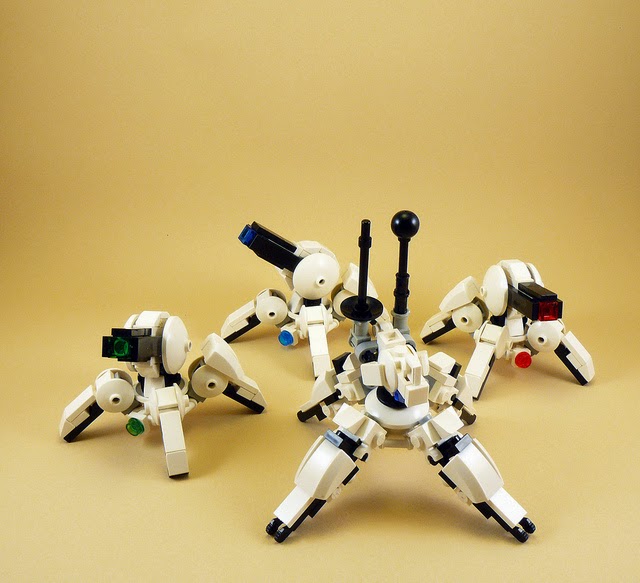 Ijad 'Beloved of God' company by Malcolm Craig.  This squad
features one of the only Suzerain frames I've seen "in the brick".

ST-23 "Castor" - Solar Union Adaptation by LowestFormOfWit.  This
brickblend frame shows just what can be done with clone bricks.

Brandish by Xenovorous.  An interesting combination of a Scrambler and
a Nimrod II by Afny.  I can't believe I haven't blogged this before now. 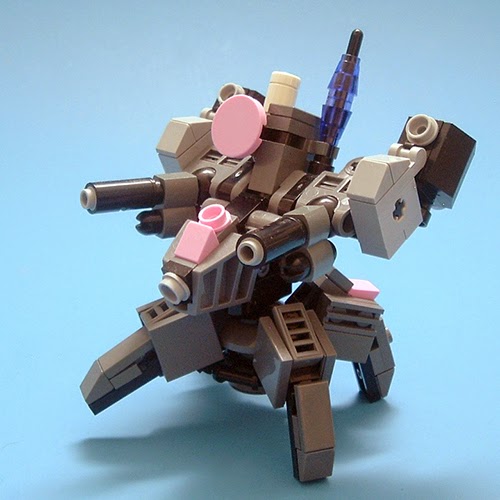 I-ST-04E Super Strider by Soren Roberts.
Yeah, like I wasn't going to include this.  :-)

I hope this kindles some interest in the Scrambler in
the community.  Go buy some, and some accents.
Posted by Mantisking at 7:10 AM 2 comments:

There's currently some Clearance sales happening in different retail outlets at the moment.  Right now I'm just focusing on Toys'R'Us as they have a 20% off Clearance toy purchase coupon.  It ends on Saturday (1/10) so jump on it while you can.  Here's a link to all the Clearance Building sets at Toys'R'Us.  Good hunting!
Posted by Mantisking at 11:18 AM 1 comment:

For the month of January this set is a free give-away with purchase of a Star Wars set at the Lego store.  There are rumors it is sold out and that Lego will not be making any more.  So I suggest you hurry and track this down if you want it. 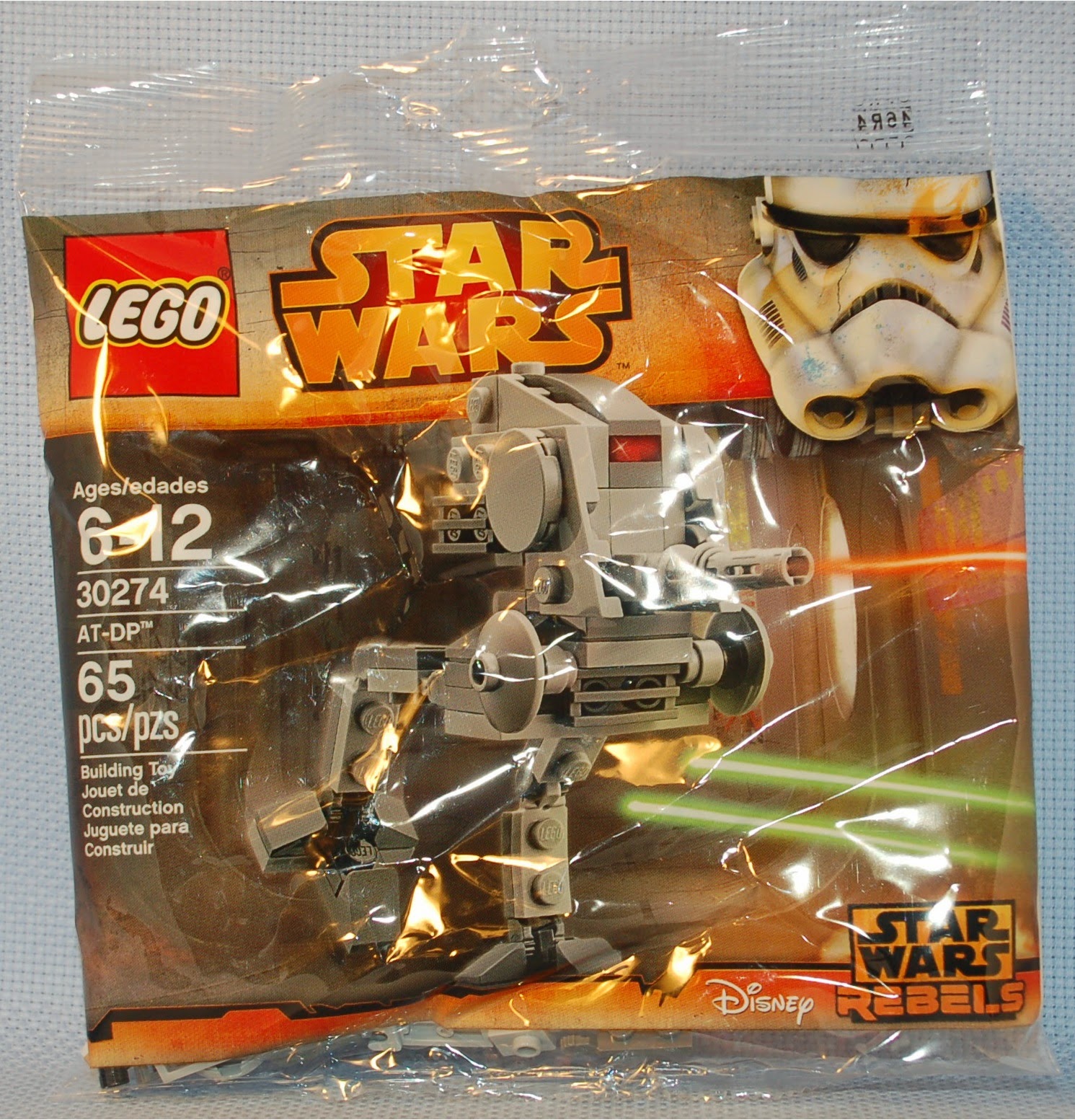 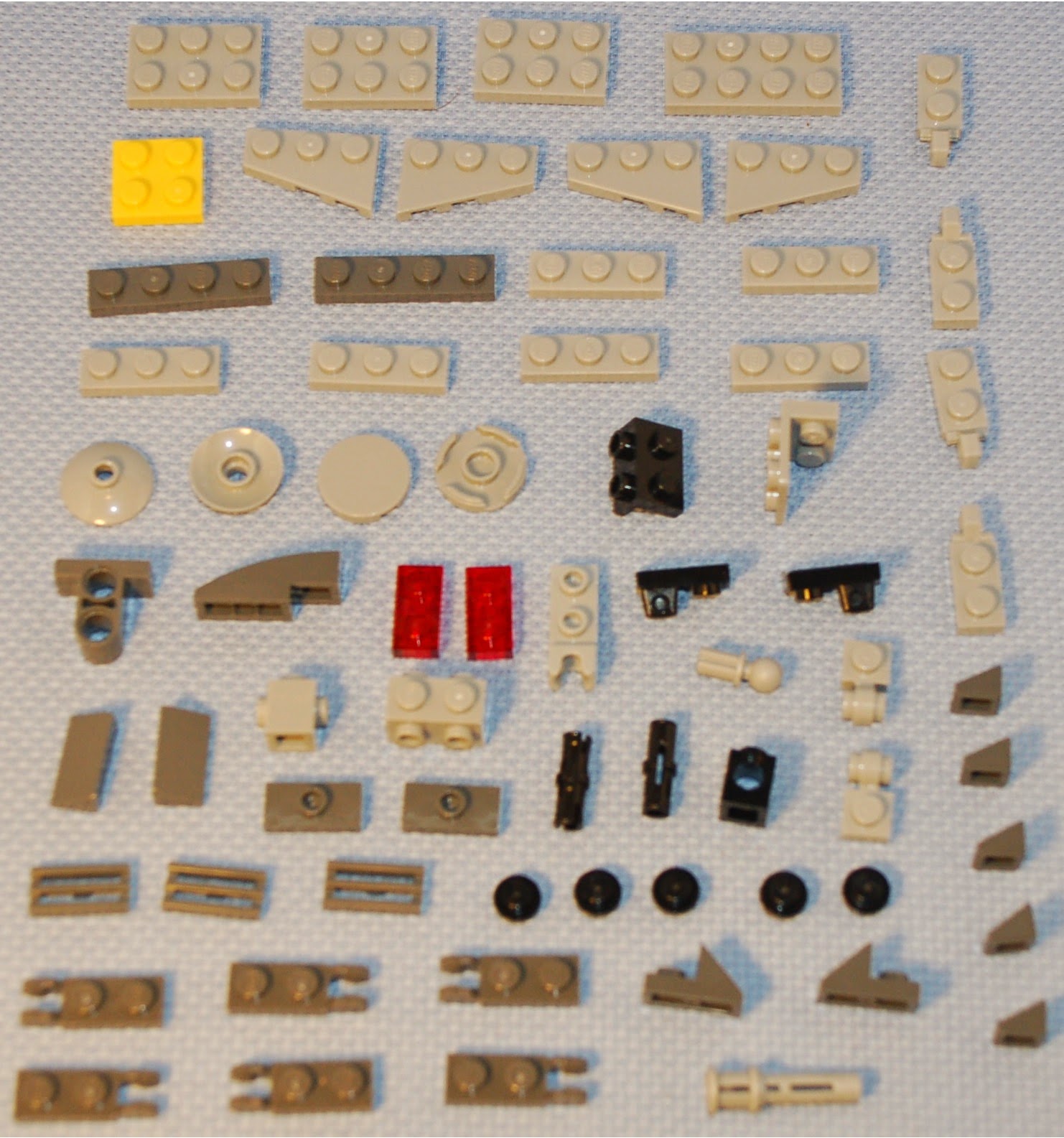 Parts.  There are a fair amount of plates  but almost half of them are Hinge plates.  There are a couple of SNOT bricks and some Technic pieces, along with a Mixel ball joint for the chin turret.  This is a good selection and should provide a good starting point for people. 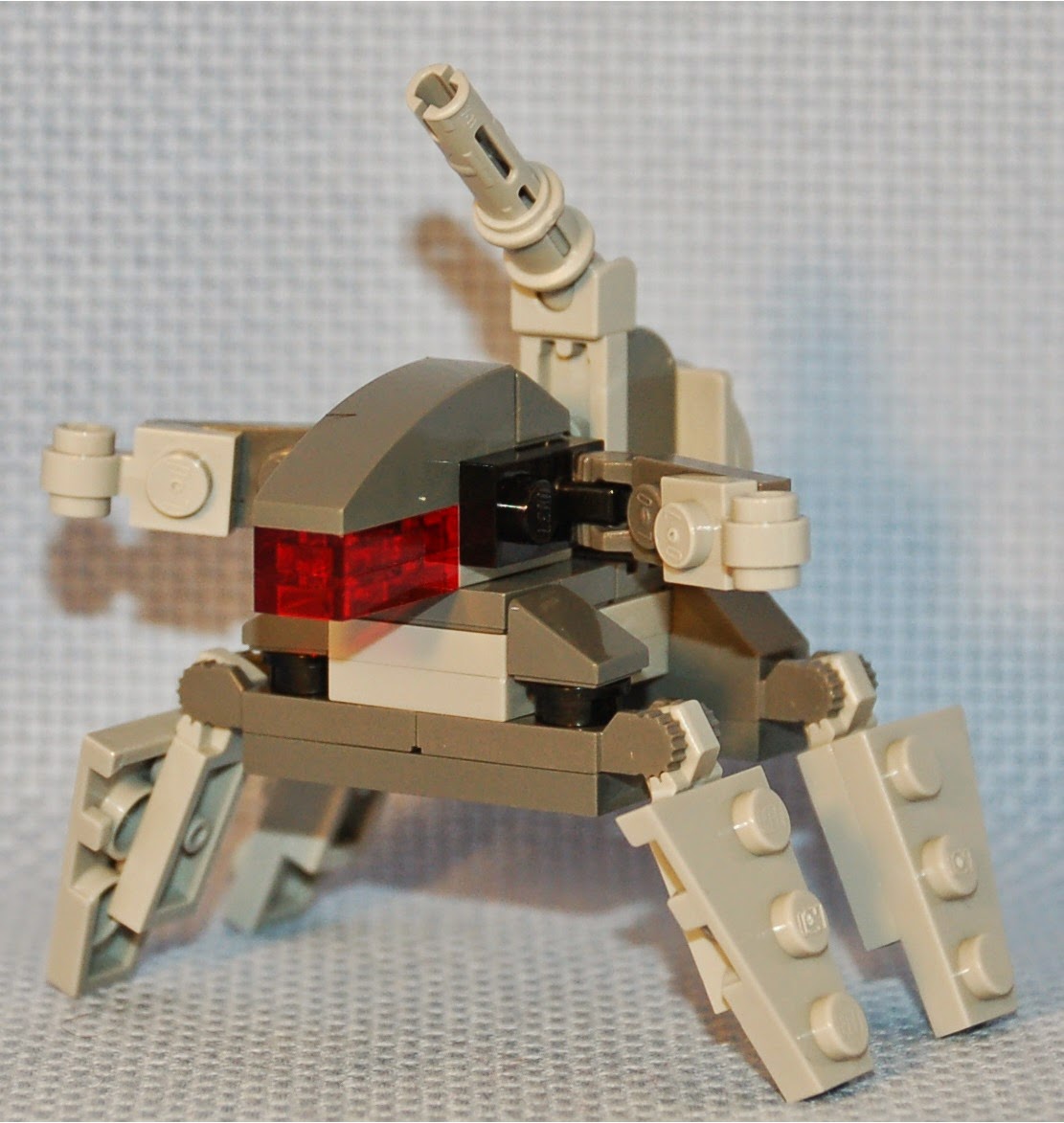 Build.  I managed a Frame
and a Station out of this set. 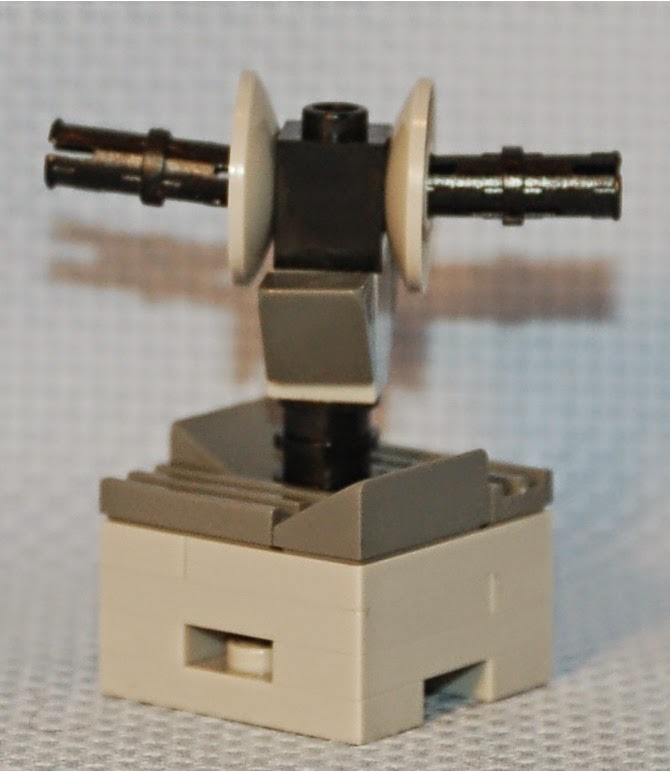 Let's take a look at the new polybags for 2015 -- that are interesting for MFZ -- shall we?  Once again, I'd like to thank Brickset for the information.

30256 Ice Bear Mech.  I've already seen pictures of this posted on the Facebook group.  Minus the minifig, this looks pretty good.

30272 A-Wing Starfighter.  This looks like an IO Frigate-in-a-bag.  Then again, most Star Wars ships do.

30274 AT-DP.  This is a free giveaway at Lego stores this month with a purchase of a Star Wars set.  Jump on it now because it will more than likely sell out before the month is over.  It is chock full of all the fiddly little bits we like.  I already have one and will be reviewing it soon.

30291 Anacondrai Battle Mech.  The Ninjago line is no stranger to mecha sets.  This one is just a little smaller than most.

30292 Jay Nano Mech.  This set, along with the previous poly bag, could be good starting points for beginning players.

30293 Kai Drifter.  Another possible IO Frigate-in-a-bag.  This one has guns that shoot!

30303 The Joker Bumper Car.  This looks like it could be the start of either a Hovertank for RA, or a Frigate for IO.

30311 Swamp Police Helicopter.  Another police helicopter, but this one has some interesting additions.

30312 Demolition Driller.  I used a few Construction polybags last year as the starting point for some interesting creations.  I think this one could be fun too.

30313 Garbage Truck.  This could be an interesting starting point, it all depends on the price.

This looks to be a bumper crop of polybags this year.
Posted by Mantisking at 6:50 AM No comments:

This is the last of the holiday polybag sets.  Well, almost.  There was a Duplo polybag but I feel no need to review it. 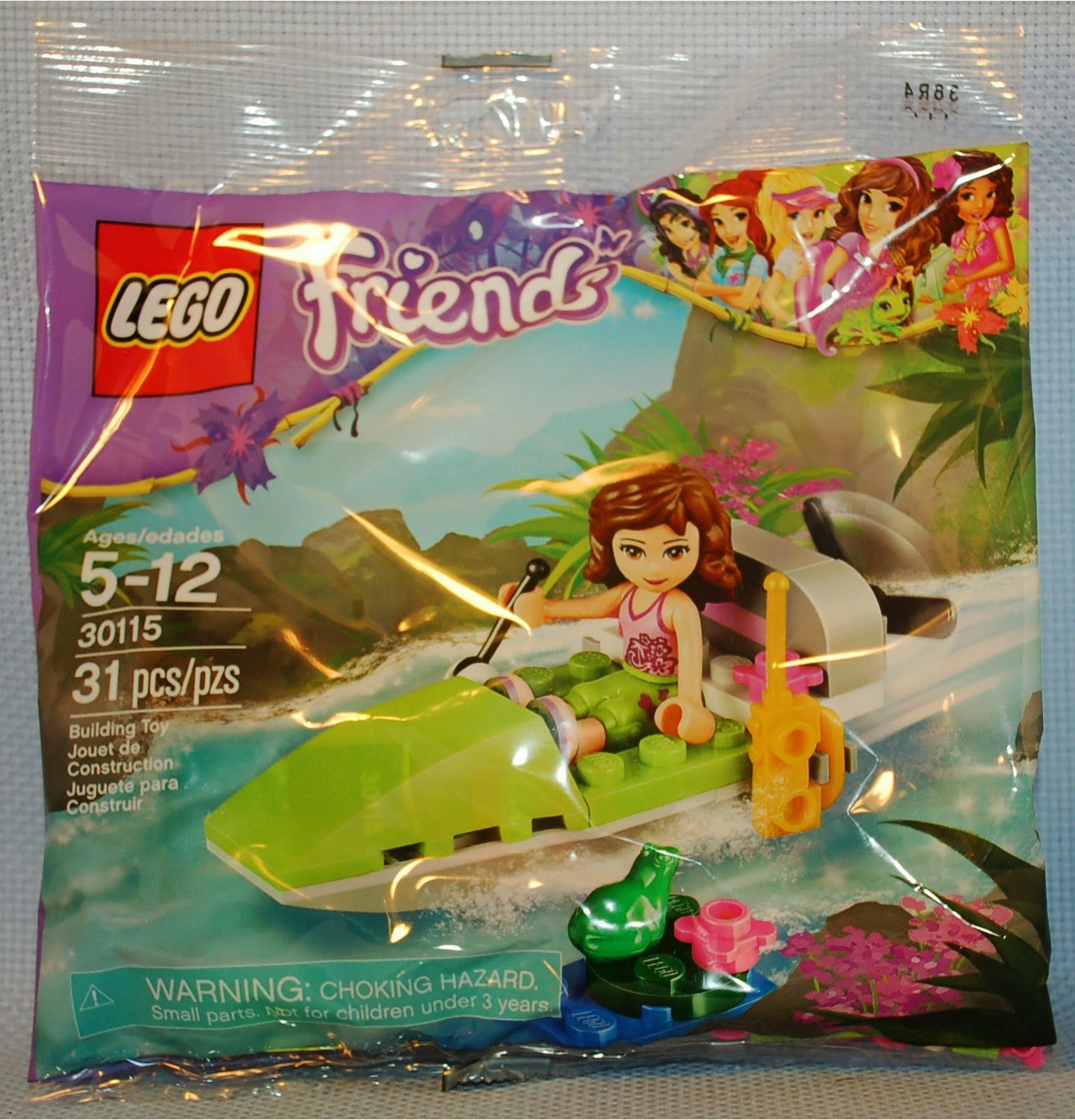 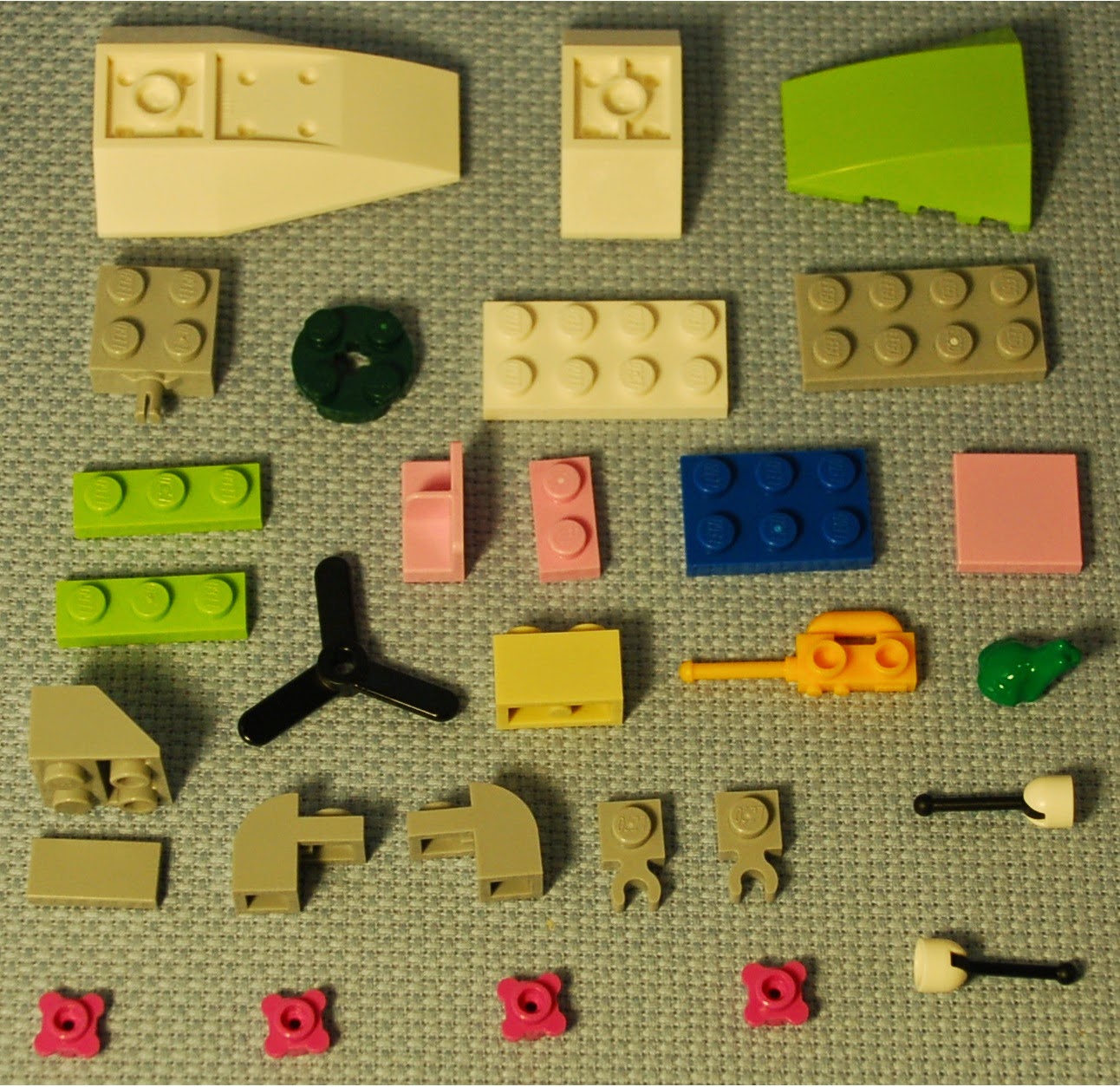 Parts.  Not a lot here.  A couple of Lever & Bases,
Plates, Inverted Slope bricks, Clip Plate Vertical,
Rounded Brick 1x1-1/3, and a minifig Radio in
yellow are what stick out to me.  The green blob
on the lower right side is a minifig scale frog.