We managed to organize a full scale game at PAX Unplugged.  Hydromancer, sBritcher, Cmdr. Rook, and myself all shared the field of battle.  We started a little late so we didn't have time for the usual depth in note and picture taking. 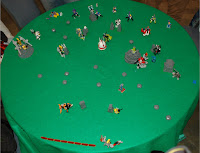 Events of Turn 2 (DDC@8): Hydromancer seizes another Station, then loses two Stations and his Turtle Frame.  sBritcher loses a Station.  Cmdr. Rook seizes two Stations.  I seize one Station and destroyed Hydromancer's Turtle frame (Turtle paste!).  Lots of Station Dancing in this round.

Events of Turn 3 (DDC@5): Hydromancer gains a Station back, then loses two more along with two more Frames.  Cmdr. Rook loses and gains a Station.  I gain another Station.  At this point they were shutting off the lights in the main hall and we had to pack up so the Doomsday clock is ticked down to zero.


Here's a few pictures of the aftermath. 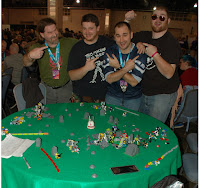 Posted by Mantisking at 8:14 AM No comments:

Target has a few items on sale this week, including Dr. Strange's Sanctum Sanctorum at 50% off.

Toys'R'Us has a number of things on sale too, but I think this may be online only.

Good hunting!
Posted by Mantisking at 10:46 AM No comments:

These are the non-Mobile Frame Zero related pictures from PAX Unplugged.

I was a little fixated on the first day so I didn't take any pictures aside from the game tables. 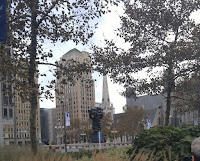 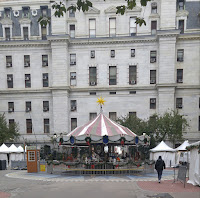 And that's all I have for this year.
Posted by Mantisking at 7:09 AM No comments:

I have more photos of the game on Saturday that I'm saving for the battle report and more photos from the con and around Philadelphia that I will post later.
Posted by Mantisking at 11:30 AM No comments:

My thoughts and observations from the inaugural year.
1.) The drive down wasn't too bad until I got off the New Jersey Turnpike and got lost.
2.) Next year I may take the day before the con off and drive down in the daylight.
3.) I didn't give out any business cards as they're still in storage from the move.
4.) I saw a few of cool cosplay costumes this year. I only managed to get one picture though.
5.) We managed to get in a full game of MFZ on Saturday, and Cmdr Rook finally got a chance to play.
6.) We didn't do any demoing of Intercept Orbit for this con.
7.) I managed to change my actual demo bag and the contents. It's now a little carry-on luggage bag with just the demo Frames, Terrain, Dice, Felt, Rulers, and Rulebook.
8.) I managed to hang with my booth-mates after the con floor closed on Saturday
9.) I'm not sure I need a "me" day for this con. I realized while walking around on Sunday that I don't need more stuff -- unless it really rocks my world -- I just need more time to play the games I already have.
10.) As always I'm scouring the internet for photos of MFZ from the con. If anyone who reads this blog has any I'd like to see them if possible.
11.) I had a really good time and met some cool people.
12.) Next year I may make more of an effort to get to the Lego store in Cherry Hill, NJ.
13.) Next year I will also make more of an effort to eat regularly and keep my caffeine intake regulated.
14.) As always, it was great to see everyone, all the friends I've made because of the con and my friends from outside the con.
Posted by Mantisking at 7:45 AM No comments:

It's the Monday after the inaugural PAX Unplugged and I've been home for several hours.  Having had a nap after the trip home and a decent dinner I'm finally sitting down to try and get my impressions recorded.

I arrived late at my hotel in New Jersey Thursday night as I got a little bit lost after coming off the New Jersey Turnpike.  But thanks to Google Maps that was fixed pretty quickly.

I got up at my regular time on Friday then met other people from the booth that were staying at the hotel.  We drove in to Philadelphia, and after some minor issues finding parking, headed for the con.  After saying "Hi" to everyone at the Indie Bazaar, I, Joshua, and Cmdr Rook went to find table space for demos.  We -- Cmdr Rook and I -- set up on two tables then proceeded to run multiple demos for several hours.  We cleaned up, knocked off, and I grabbed some food in Chinatown.  After going back to my hotel room and eating I went out for a walk.  Luckily enough, there was a Toys'R'Us, Dollar Tree, and Walmart across the street.  I got a phone charger, something to drink, and a new for 2018 Creator set.  Then I went back to my room and crashed for the night.

Saturday started a little differently as there was a half marathon being held in Philadelphia and some of the streets were blocked off.  This led to us taking the train in then walking to the convention hall.  We waited in the Queuing Area with everyone else then headed in to set up.  After setting up I ran two demos -- I swear I blinked it was two hours later -- then Cmdr Rook relieved me.  I went back to the booth, chatted a bit, and got in the majority of a demo of Tiny & Chrome.  Tiny & Chrome is Lego based, tabletop wargame that is built on elements of MFZ.  It's also created by Eliot Baker, that's right, another member of the Baker clan.  After that I grabbed some coffee and a snack before heading over to the demo table for the big game.  I met sBritcher, Hydromancer, and Cmdr Rook for a full scale game.  We started at 3:30 and finished at 6:00.  We were moving pretty fast and I don't have many pictures but I may have a battle report for the game at some point.  We also had a gentleman named Chris hang out for the entire game basically cheerleading.  It was awesome!  After breaking down the table we headed out with a bunch of people for dinner.

Sunday I drove in by myself.  I got in pretty early and had to wait for someone with an Exhibitor badge to walk me in.  After setting up, I ran three more demos.  One was for Chris, the gentleman from the night before.  Vlad, whom I've mentioned before in my PAX East posts, also made it to the table and played in a few demos.  Cmdr Rook ran a demo then we knocked off, cleaned up, and went to actually see the convention -- instead of just the booth, the demo table, and the stretch of floor between the two.  After the con closed at 6:00 I helped break down the booth and load stuff into people's cars.  Then I headed back to my car and home.

So I totaled up at nine full demos run and one full scale game played for the three days of the con.  I had a great time, met a bunch of cool people, and I'm looking forward to next year.
Posted by Mantisking at 6:50 AM No comments:

For the next three days I'll be helping demonstrate Mobile Frame Zero at PAX Unplugged.  We'll be at booth # 414 so come see us if you're there.
Posted by Mantisking at 7:28 AM No comments:

This was a "free" giveaway this week with $30 Lego purchase at Toys'R'Us. 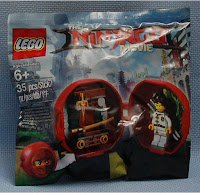 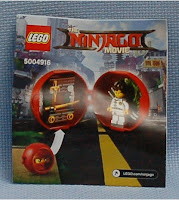 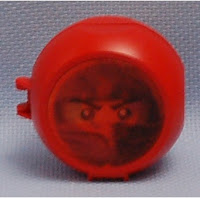 Pod, Outside.  It's slightly under seven Bricks tall. 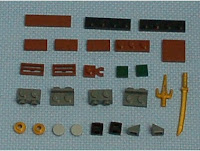 Pod, Inside.  Laying flat, it's two Bricks tall.  You can attach five Bricks inside to make it a one-shot piece of Cover.

5 Below is selling some sort of Clone Brick Construction sets for $4.00 each.  Apparently all eight sets combine into one giant build.

Target is running a 20% off on select Lego Super Heroes, City, Duplo and Friends sets sale, along with a "free" Millenium Falcon polybag with $24.99 Lego Star Wars purchase.

Barnes & Noble has 25% off on Nexo Knights.  I'm not sure if this is an online only sale.  They also have 25% off on Nano Bloks if anyone is interested in that.

Toys'R'Us has a bunch of Lego items on sale this week.

K-Mart's Christmas Toy Book has been released.  There are several Lego sets in it.

Walmart's Black Friday ad has been released.  There are only two Lego sets in it.

Good hunting!
Posted by Mantisking at 9:14 AM No comments:

I guess the Christmas season has started.  I think this is going to be one of the polybags at Target this year. 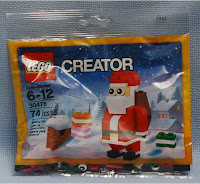 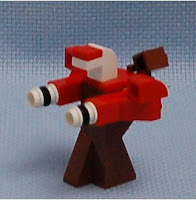 I could call this Round 4.  Unfortunately this time I broke one of the rules I set down in the original post.  This time I went with the First Order Walker and the Batman Phantom Zone polybags.  This combo comes out to 113 pieces.  Now, seven of these pieces are from the minifig but that still brings us to 106 pieces and over the limit I imposed. 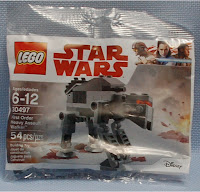 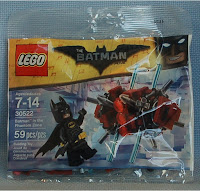