I can see you thinking "Minifigs?  We don't use minifigs in MFZ."  Ah, but we do -- if we break them down for component parts.  And, since the item I'm reviewing is the Dalek minifigure, I think it's something we could use.

Here's the Character Builder Dalek and the package it came in.

As you can see the Dalek breaks down into five pieces.  The eyestalk and the weapons are removable.  They also really need to be seated firmly so they don't fall out.  The two pieces that catch my eye are the head and the base.  The head could be used as a sensor dome and the base could be used as a shield.  The "neck" section could possibly be used as filler but I'm not sure. 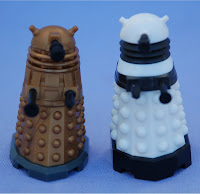 Here are the old and new models together.  The newer model Dalek was in Series 2.  The differences between the two are obvious. 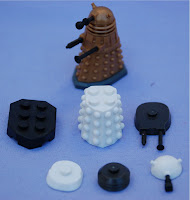 You can see the newer version of the Dalek breaks down into more pieces.  I prefer the head from this version.  It's a little bigger and can actually take a Technic Friction Pin.  The weapons section could prove useful as a weapons pod for a Frame.  I think there may potentially be more usable parts in this version.  I'm really going to have to track down more of them as this one belongs to my girlfriend.

Overall, I'd give these a B+ grade.  They have useful and interesting parts, but also parts that may not be useful.
Posted by Mantisking at 7:28 AM