One of the things that gets used during a game, besides dice and Lego, is generally a method for keeping track of what systems each mech on your team possesses. 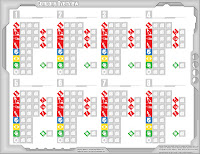 Here's one by Ybliss.

There are three over at No BS, Just ABS.
This is the one I've used for years.

There have been some other ones made recently that are rules reminders but I think they're of limited use.  Just keep a book around.  Once you've played enough games the rules will get internalized.

I still have to figure out which one I'll use in the future.
Posted by Mantisking at 7:07 AM