We were asked -- by the owner, who is a part time member of our group -- to come and play a game/give a demonstration of MFZ: Rapid attack at Paper Asylum this past weekend.  I actually didn't play in this game, all I did was take pictures.  I was running the demo table off to the side.  I also didn't write this battle report so this should be interesting.

Events of Turn 2 (DDC@8): Tyler retreats, Tom moves two Frames up to Tyler's Station.  Bloodshed ensues in the middle of the board.  Occam's Spork and Tom take some damage near the Stations but Narbey and Tyler mostly stay out of it.  Occam's Spork foolishly returns to his Station to attack Tom's frame.

Events of Turn 4 (DDC@1): Tyler attempts to destroy Occam's Spork's frames at Tyler's Station, but falls short and runs afoul of Station Dance rules he declares "totally bogus".  He attempts to destroy Narbey's weakest frame but Narbey rolls extra well, takes no damage, destroys Occam's Spork's frame and takes Tyler's Station.  Doing so put him in range of Tyler's full rage, destroying Narbey's frame.  Occam's Spork and Tom attack one of Narbey's frames in a fit of spite.  Tom attempts a long shot maneuver to win but fails to do so.

Here's a few pictures of the aftermath. 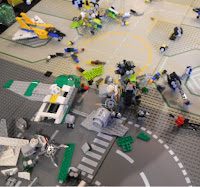 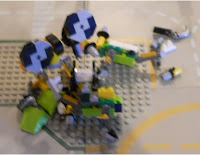 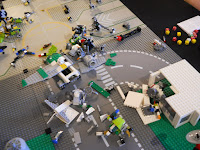 Posted by Mantisking at 7:48 AM