Since our MFZ group hadn't had a game since late 2014, and we were all going to be attending PAX East, we decided to get together and have a game on the last day of the con.  Initially it seemed we were going to end up with an eight player game -- the initial group plus friends and a few others -- but it ended up being only six.  The regular group -- Tom, Grafvonbarnez, Stevenik, and me -- was joind by Bassclef and Vlad.  We all showed up at the MFZ demo table at 1:00 pm, broke out our squads, stations, and terrain, and prepared to do battle.

Note 1: There was so much going on , and I was talking to passers-by about the game, that I can't really relate what everyone else at the table was doing.  So this battle report is going to be relatively one-sided.  I'll tell you what my thoughts and plans were as the game progressed.  I'll also be relying on the notes Tom took.  Hopefully the other players can chime in with other things that happened.

Note 2: All of the pictures are from my cell phone as the batteries died in my regular camera and I didn't have any spares.

Here are the pictures from
the start of the game.

Events of Turn 1 (DDC@11):
My station is in the middle of the battlefield -- undefended  -- next to the mosque with everyone else arrayed around the perimeter I set up.  I knew I had a target on my back from the minute the game started so I kept passing and pushing everyone else to make a move.  Grafvonbarnez actually had the closest mech to any of mine so I waited until he activated that one then I made a play for Vlad's station.  At that point all hell broke loose and two of my mechs got pounded down to white dice.  No stations are taken and no mechs are destroyed.


Events of Turn 2 (DDC@7):
I think around this time Blorf from the Hangar showed up.  I started talking to him, Joshua, and my friend Ron in an attempt to fade into the background a little in hopes people would forget about me and my mechs.  Unfortunately I lose a mech, which was the first blood on the field.  Grafvonbarnez grabs my Station but loses his to Tom in the process.  He also exchanges a lot of fire with Rob, losing two mechs.  Stevenik exchanges fire with Rob as well.  I make a few random moves with my remaining mechs. 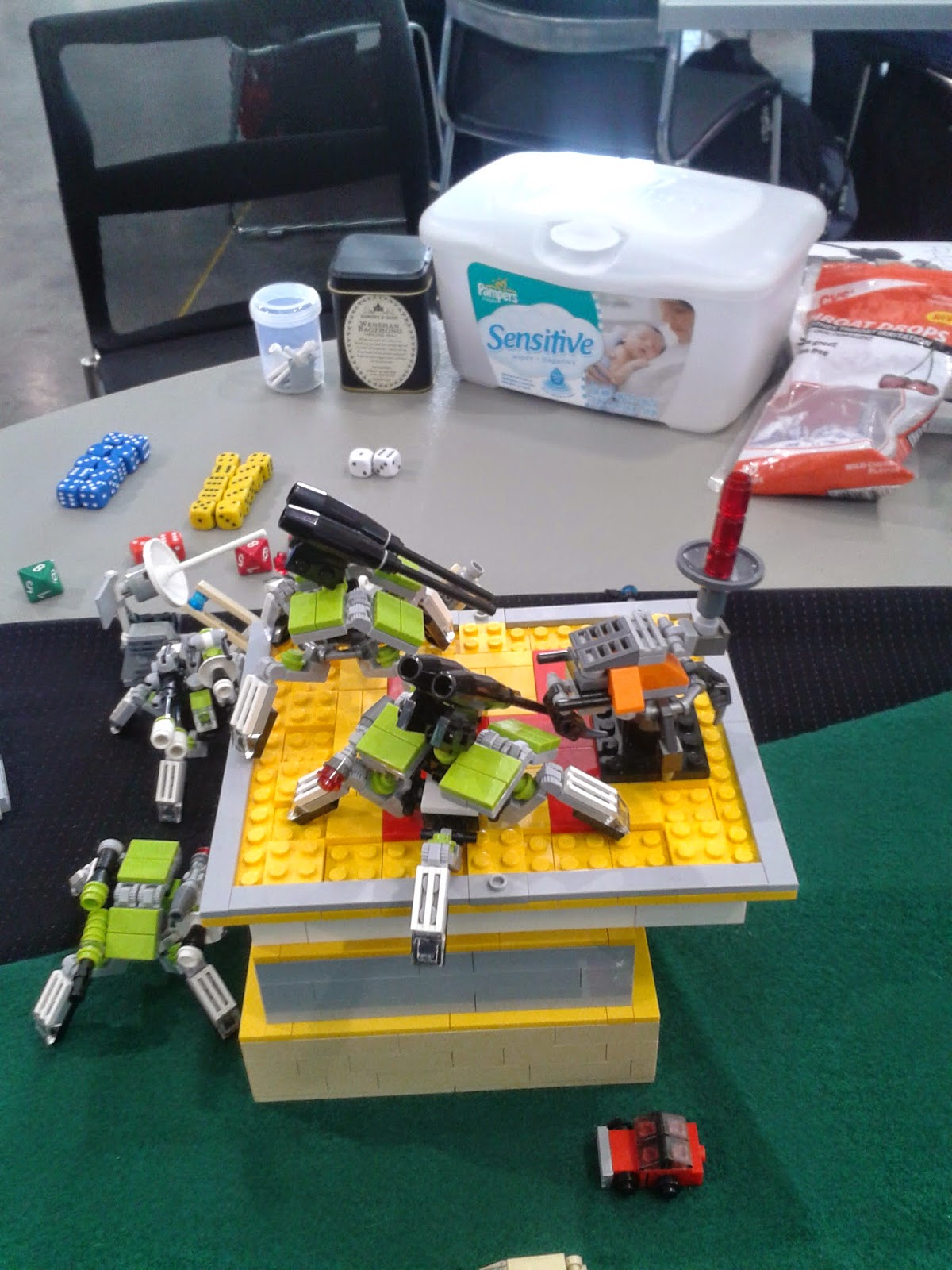 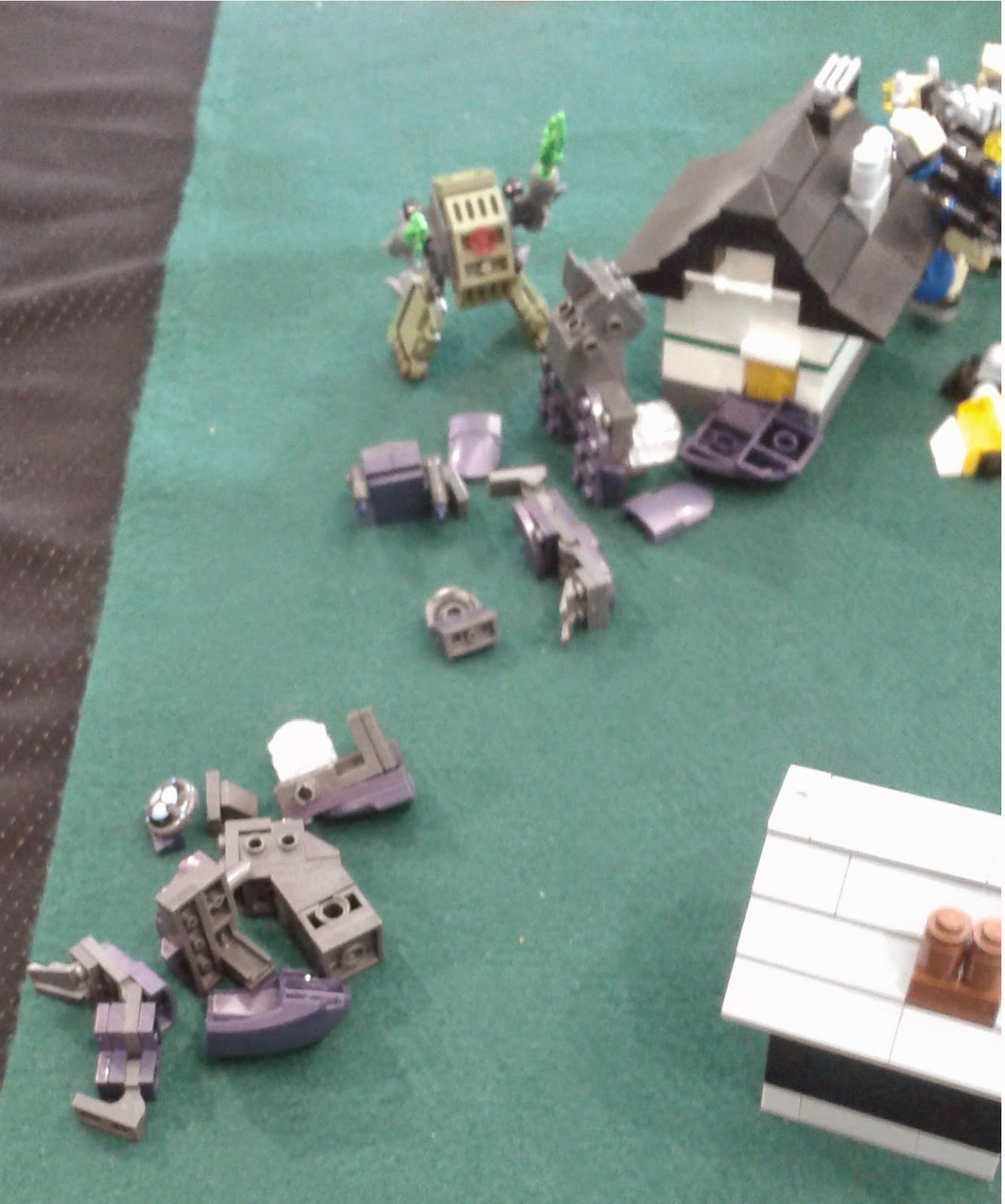 Events of Turn 3 (DDC@2):
Stevenik grabbed my station that was under Grafvonbarnez's control but lost one of his mechs along the way.  I snag it back with my one undamaged mech.  The other sprints to take Vlad's station but falls one unit short.  Vlad eventually kills this mech.  He also kills one of Tom's out of "spite".  :-)  Stevenik loses another mech to Tom.  Prior to this it had withstood three different attacks.  Stevenik went so far as to declare it was protected by God and laid down one of the strange bibles that a booth had been giving out.  You really had to be there.  :-)  Grafvonbarnez, in a brilliant move, recaptures his station that Tom left undefended.  Rob loses two mechs and his station to Grafvonbarnez.  At this point everyone had activated and the DoomsDay Clock clicks down to zero.

Posted by Mantisking at 6:49 AM