To finish out review month, we have the old Robo Champ game from Lego.  I picked this up back in December from the Clearance shelves of a local Walmart.  I originally purchased a copy back when the game was still in print as well.

Parts 1.  Look at all the 1x2 Plates w/Bar along the bottom.  Then we have a number of different Slope blocks and a bunch of different Plates. 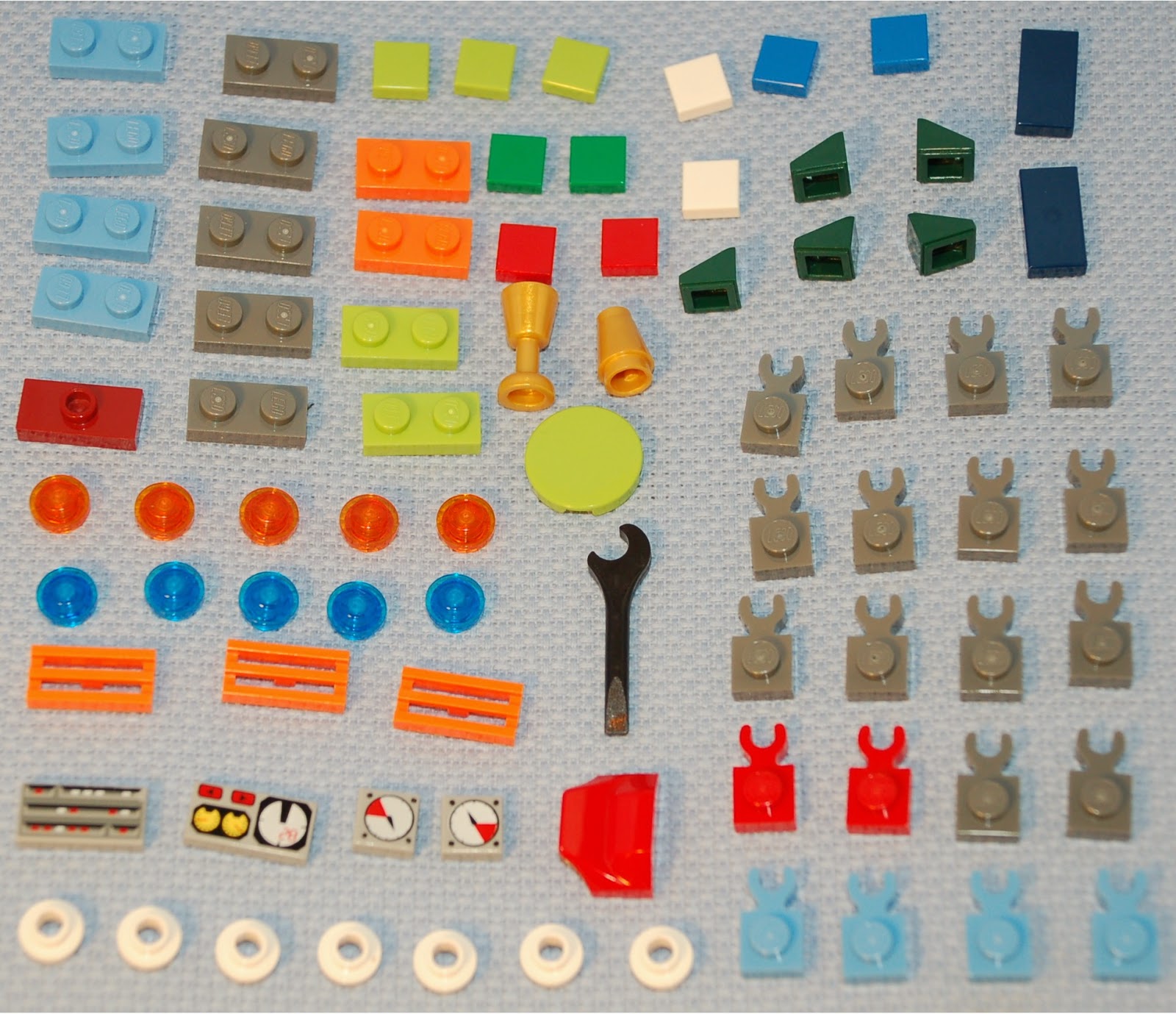 Parts 2.  A bunch of 1x1 Plate w/Clip Vertical, a few small tiles and plates, some cheese slopes, and a number of 1x1 rounds.  Not bad. 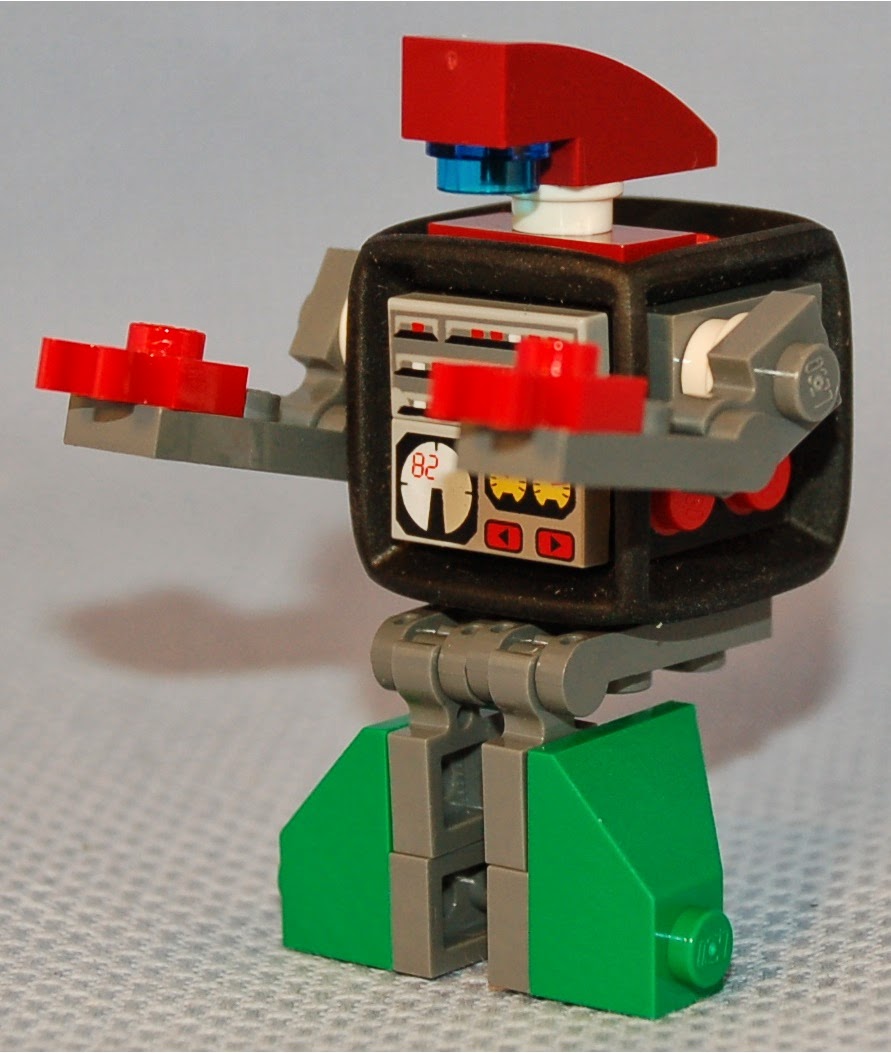 Here's a quick proof of concept.  It uses a favorite technique of mine, using the die as the core of the build.  Someone on the Hangar once described them as a "giant Travis brick".

If you can't build a frame right away, or choose not to, does it have parts you should be able to put into use right away?  Yes.  (+5)
Does it have more than a handful of immediately useful parts?  Yes.  (+5)
Score: +20 (A+).  I guess it shouldn't be a surprise with a name like Robo Champ.  Most of the games from Lego were a good deal.
Posted by Mantisking at 11:26 AM No comments:

I was planning on reviewing one of the new Chima Legend Beast sets.  But someone already beat me to it.  :-D  So I dug this one out of my review pile instead. Parts 2.  Blade Tonfa, Robot Arms, two printed tiles -- one each round and square -- four new 1x2/2x2 Brackets, two new Technic bits, three minifig guns, and a host of other small bits we all like. 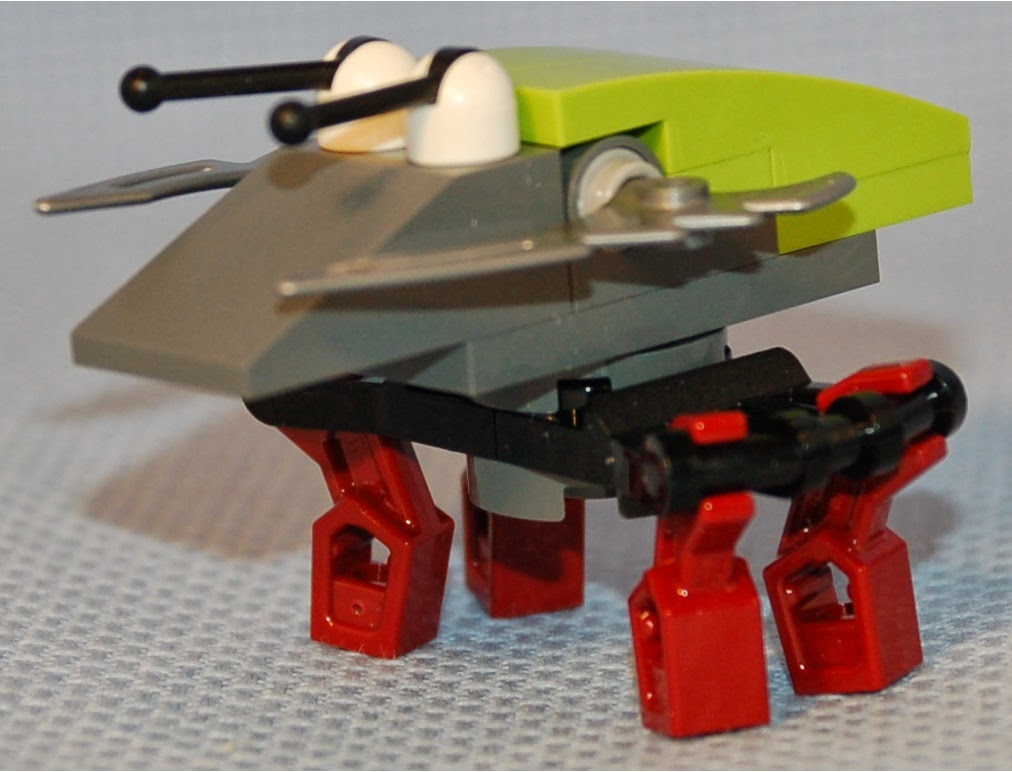 The first design I cranked out was a quad, my old standby.  I call it the Bug. 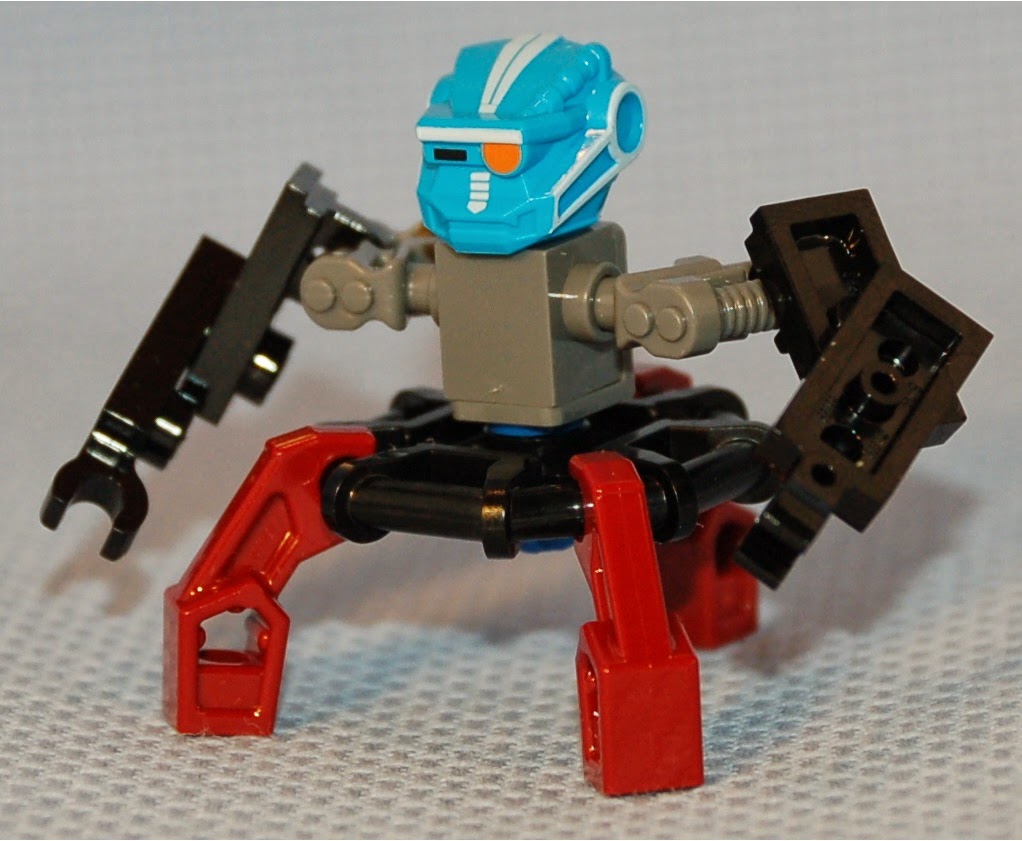 The second was an experiment in connections called Power Armor. 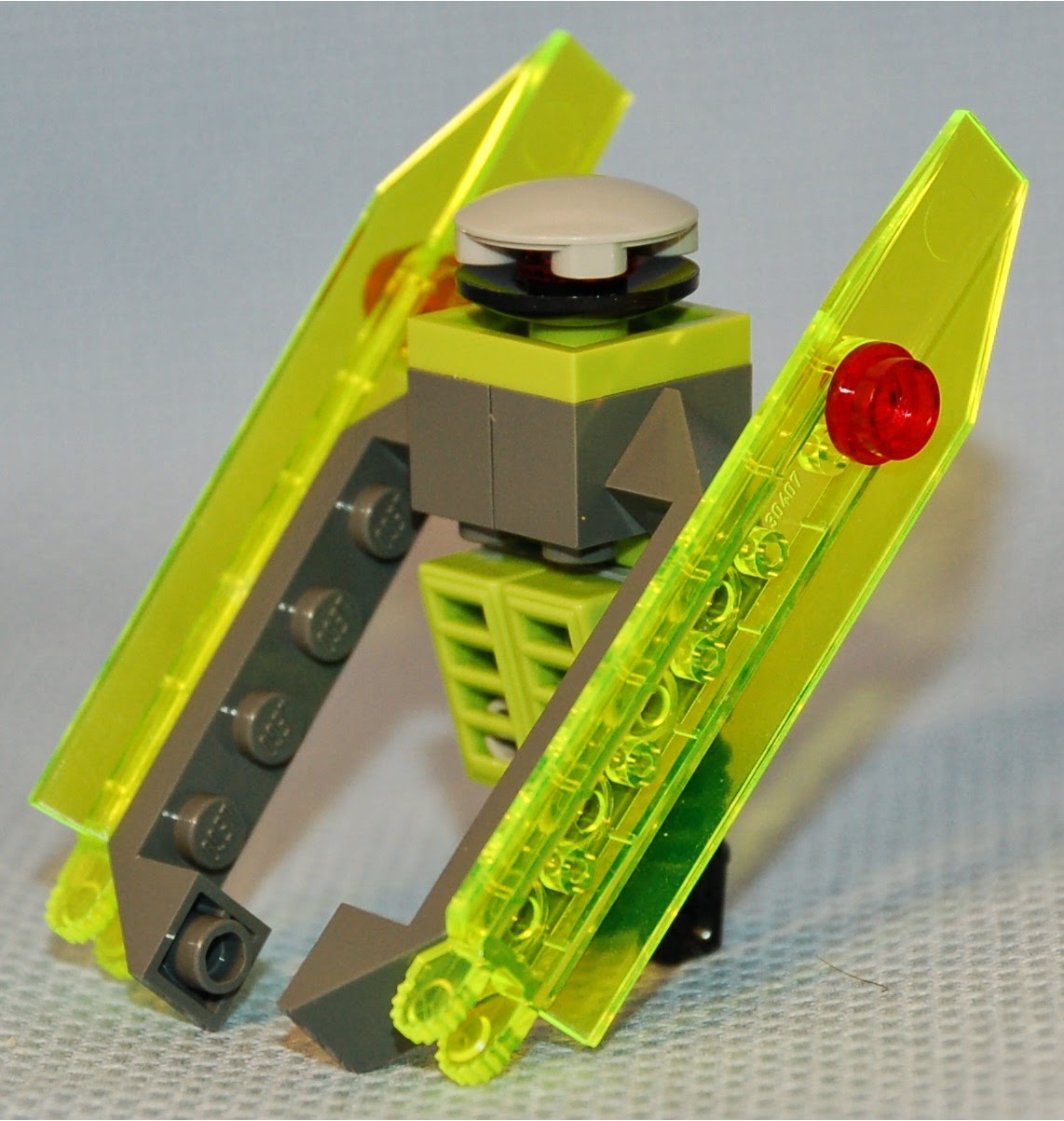 The last is something slightly experimental.  Knuckle Dragger.  Now, none of these are going to wow people at the gaming table, but they do prove that you can use this set to create something right out of the box.

If you can't build a frame right away, or choose not to, does it have parts you should be able to put into use right away?  Yes.  (+5)
Does it have more than a handful of immediately useful parts?  Yes.  (+5)
Score: +5 (B+).  This should have had a better score.  Lego seriously dropped the ball with the pricing on this line.
Posted by Mantisking at 6:41 AM 1 comment:

Moving on to the final group of Mixels, we have Vulk of the Red Mixels. 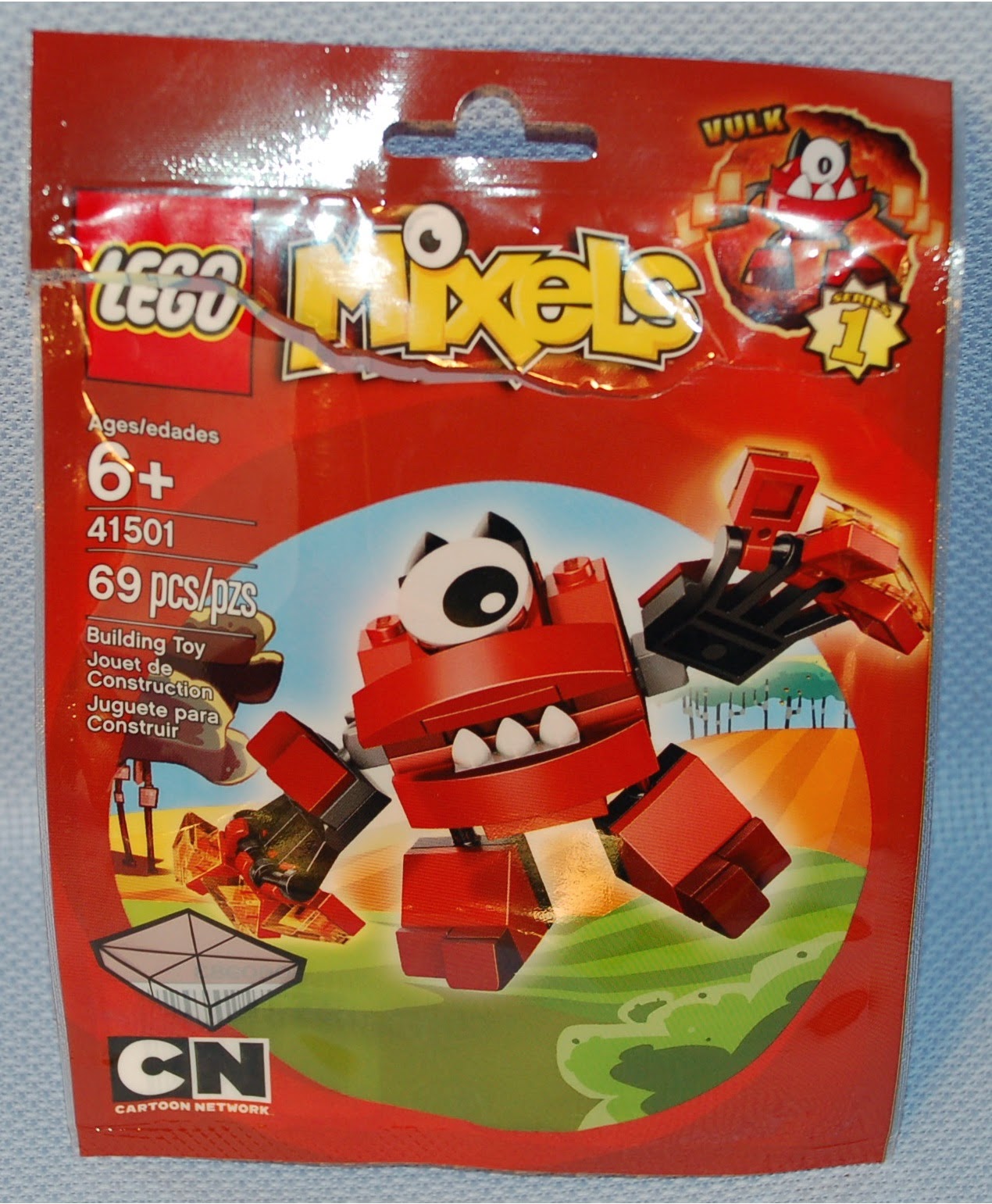 Here you see the instructions and the bag containing the pieces.  I find it odd they have a bag of pieces inside what is essentially a polybag.


Here's a small frame design with plenty of room for expansion.

We interrupt your month of reviews to bring you exciting news!  The MFZ: Alpha Bandit Kickstarter is live!
Posted by Mantisking at 9:28 AM No comments:

Just a bit of a break from the norm
Just a little somethin' to break the monotony
Of all that hardcore review that has gotten to be
A little bit out of control...

Yeahhhh, sorry DJ Jazzy Jeff and the Fresh Prince, I couldn't help myself.

Two years ago today I made the first post on this blog.  What a long, strange trip it's been.  :-)  I was going to hit you with a bunch of statistics, but I changed my mind.

I'm going to take this time to say, "Thank you."

Thank you to Vincent, Sebastian, and Joshua for inventing Mechaton and it's successor, Mobile Frame Zero.

Thank you to Joshua for bringing me in to PAX East to demo MFZ where I got to meet a lot of other fans.

Thank you to everyone who reads this blog.

Thank you to the entire MFZ community for being cool people.

Here's to two more years.
Posted by Mantisking at 6:44 AM No comments:

Yup, I actually bought a Mega Bloks set that wasn't clearanced or on sale.  I did have a 15% off coupon though.  I've been interested in these sets for a while, mainly for the pieces in that purple color. 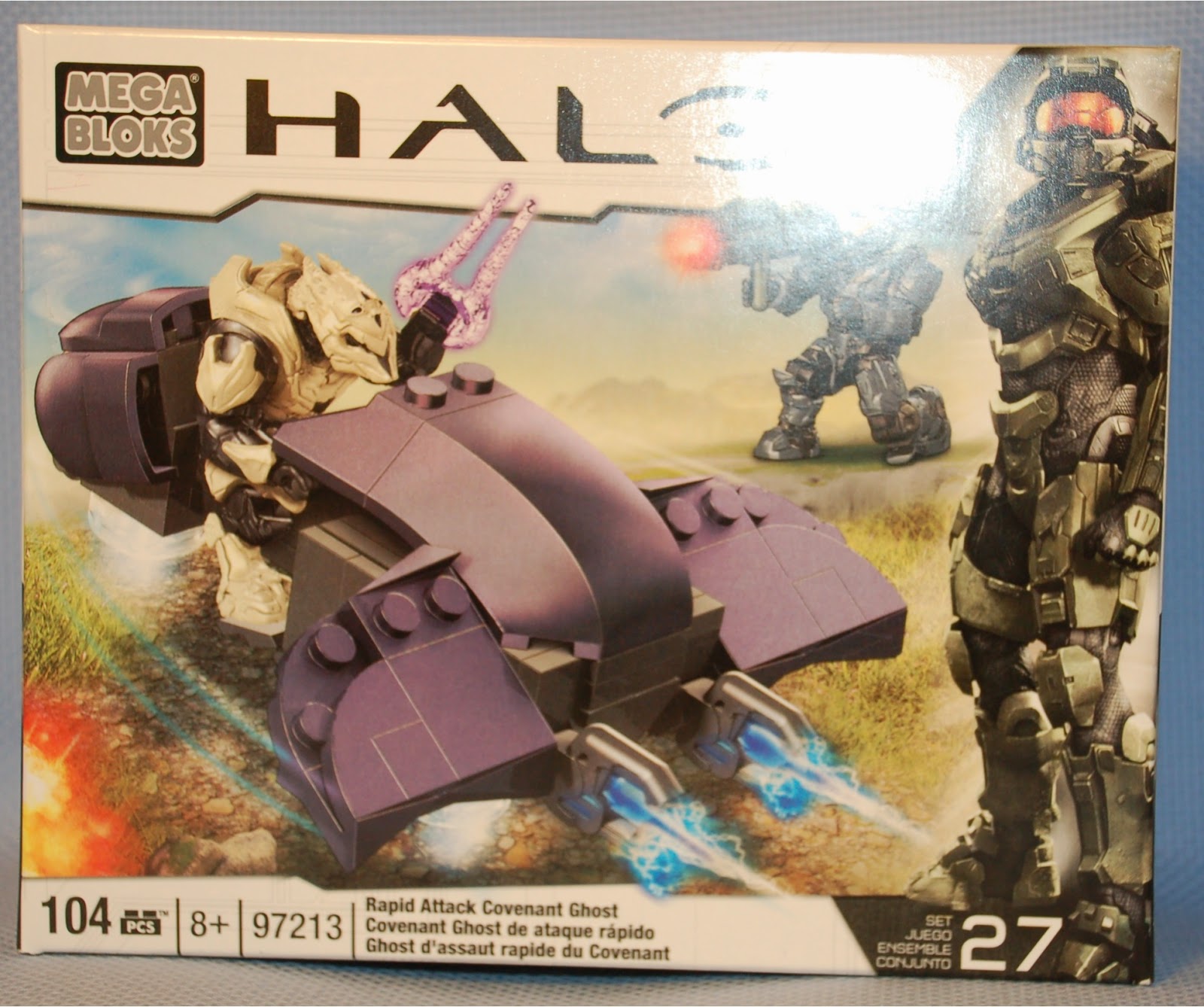 Instructions.  There's a minor difference to the ones you'll find in a Lego set.  They highlight the studs where pieces are to attach in the individual steps.

Parts 1.  Lots of Pearlescent Charcoal and Dark Purple pieces.  The 1x2 Plates w/Slope along the bottom of the picture might be good for greebling in a build.  The two "half brackets" in the middle of the picture are interesting.  As are the two 1x2 Slope w/Studs pieces.

Parts 2.  The Dark Purple shaped pieces at the bottom of the picture could be interesting.  Same goes for the Trans-Clear pieces.  The 1x2 Brick w/Hole looks interesting, I'm not sure if it's functionally any different from a regular Technic Brick though.  The piece down in the lower right corner is a 1x2 Plate w/Studs on both sides.  That should definitely be useful. 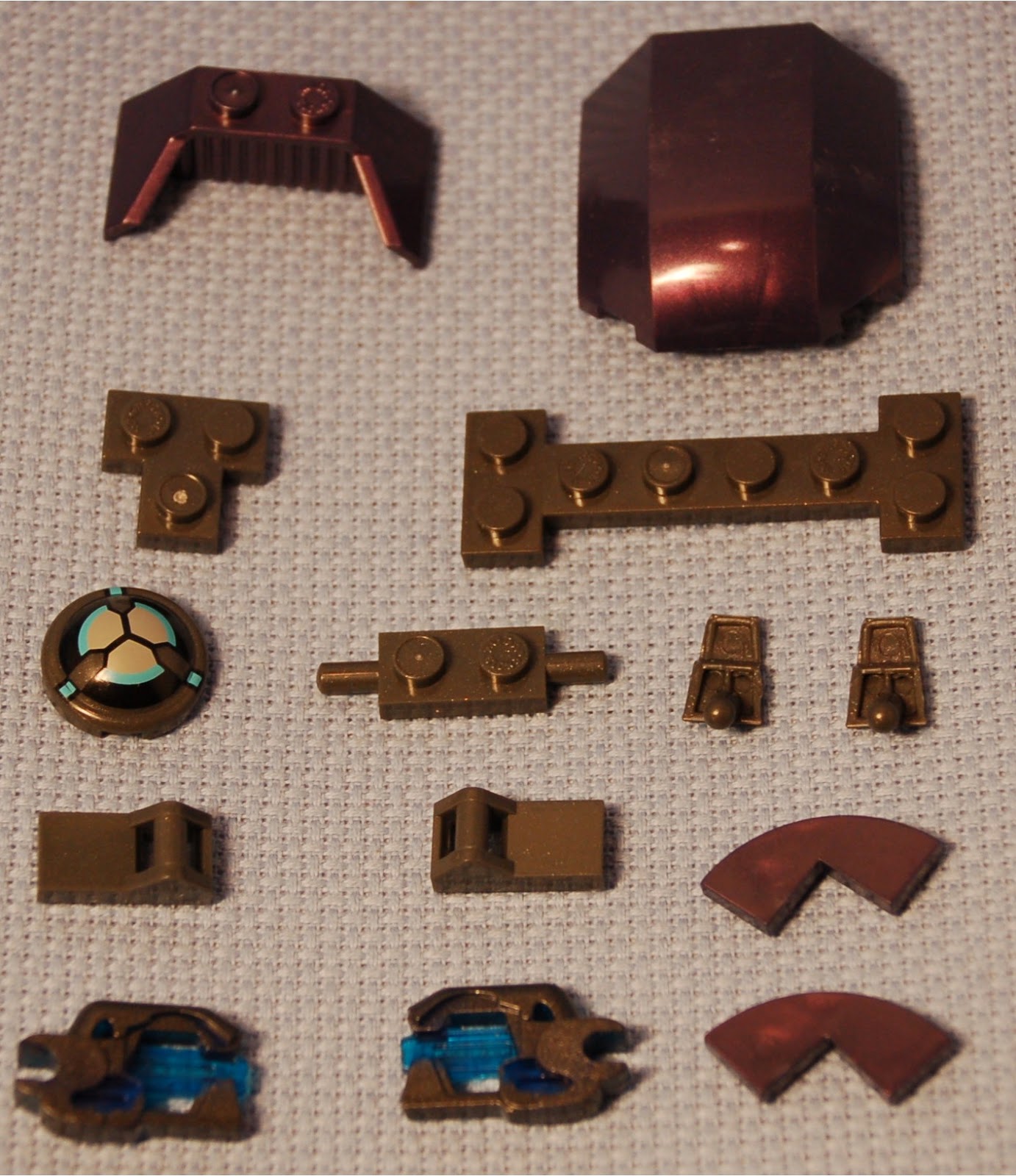 Parts 3.  The 2x2 dome printed dome piece is what catches my eye first.  Then the two gun-like pieces down the bottom.  The curved tiles are interesting too.  Hell, everything in this picture is interesting in one way or another. 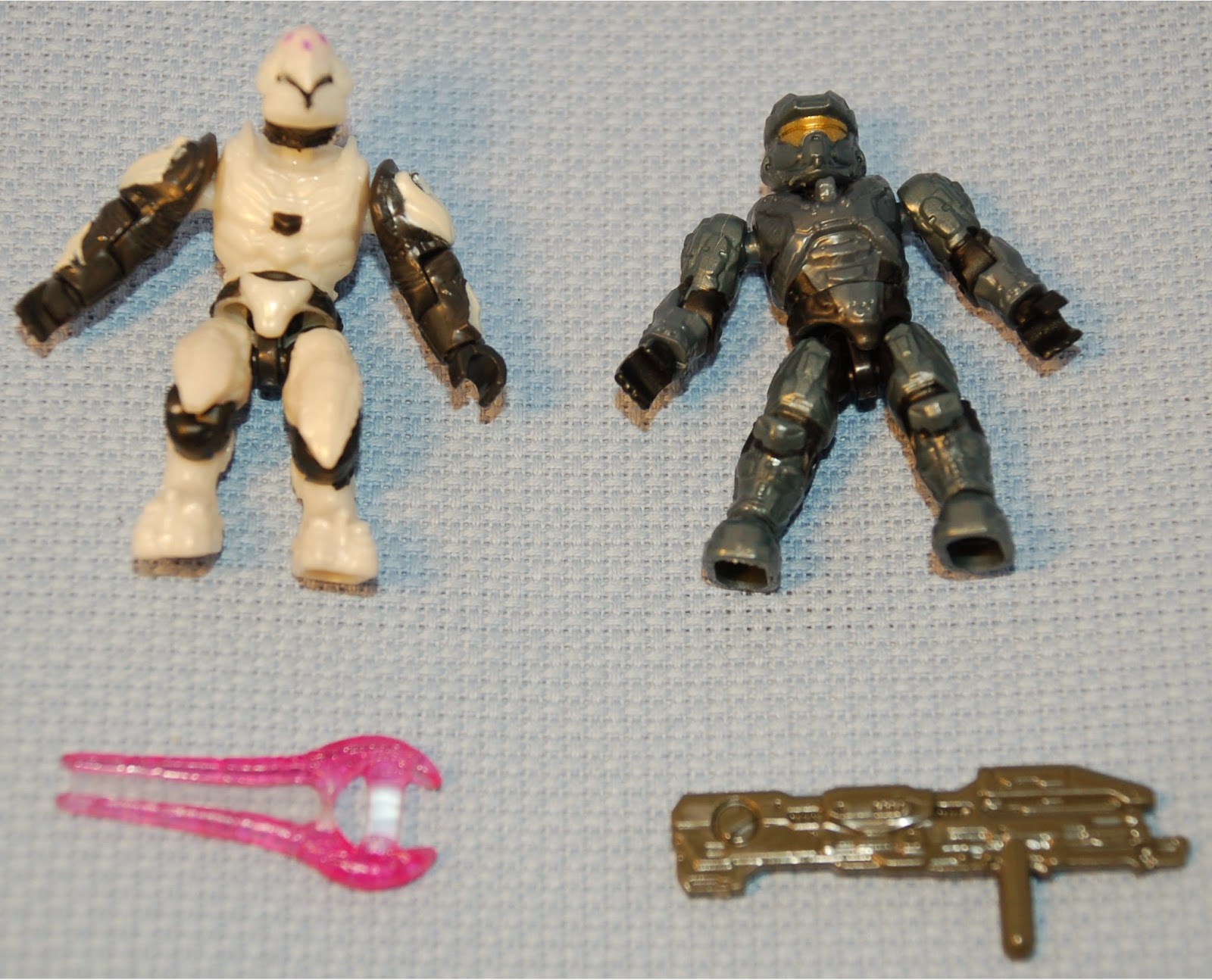 Minifigs.  They each have 11 points of articulation.  They kind of remind me of an old micro-scale action figure that used to come with Micro-Machines or some other old vehicular toy.  I think you can find better versions of that Power Sword from 3rd party companies like Brickarms or Brickforge. 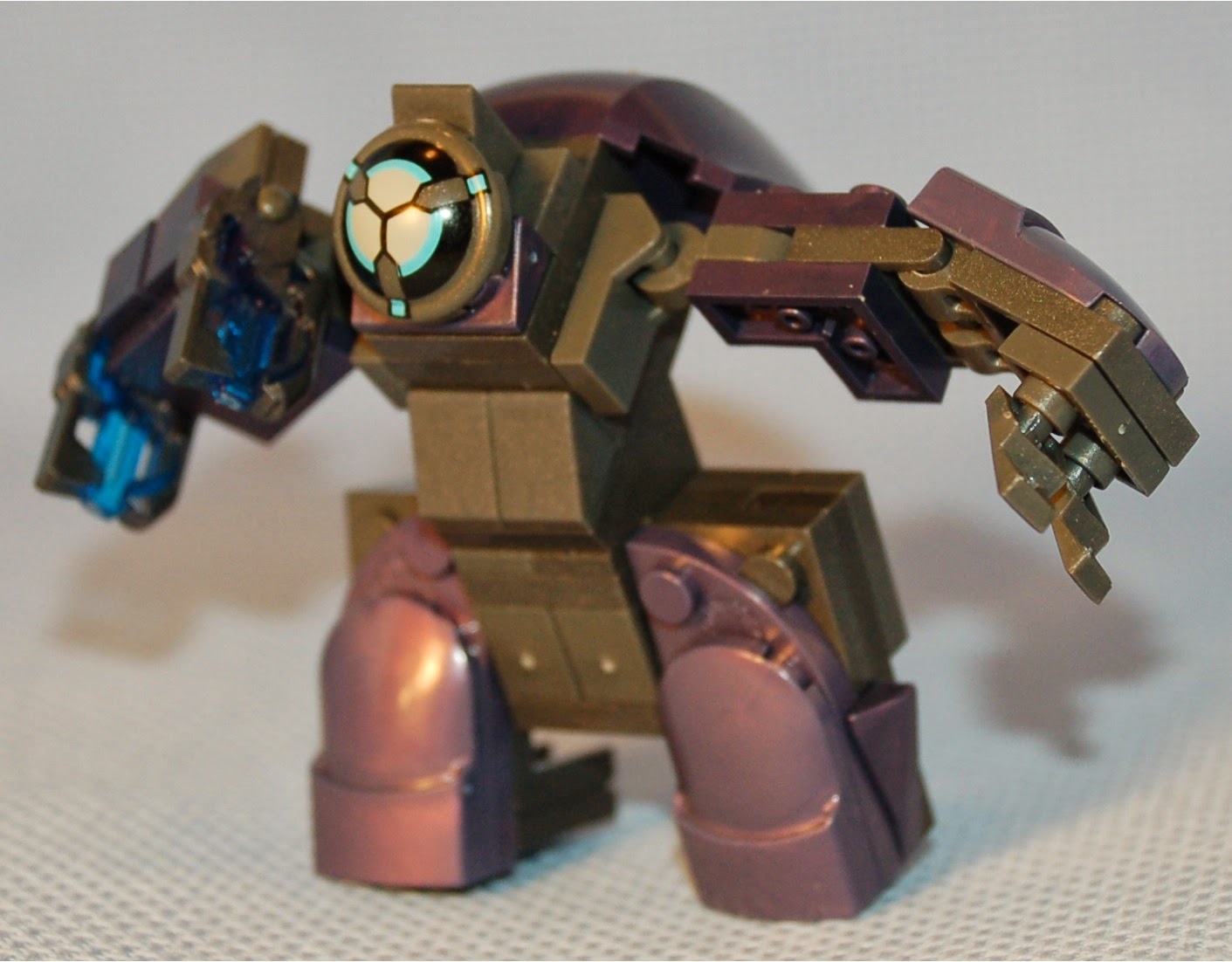 If you can't build a frame right away, or choose not to, does it have parts you should be able to put into use right away?  Yes.  (+5)
Does it have more than a handful of immediately useful parts?  Yes.  (+5)
Score: +5 (B+).  Not bad for a clone brick set.  I'm going to have fun experimenting with it.  If the price was two dollars less it would have scored higher.
Posted by Mantisking at 6:51 AM 1 comment:

I picked this up on a whim, hoping the price per piece would be something close to sane. 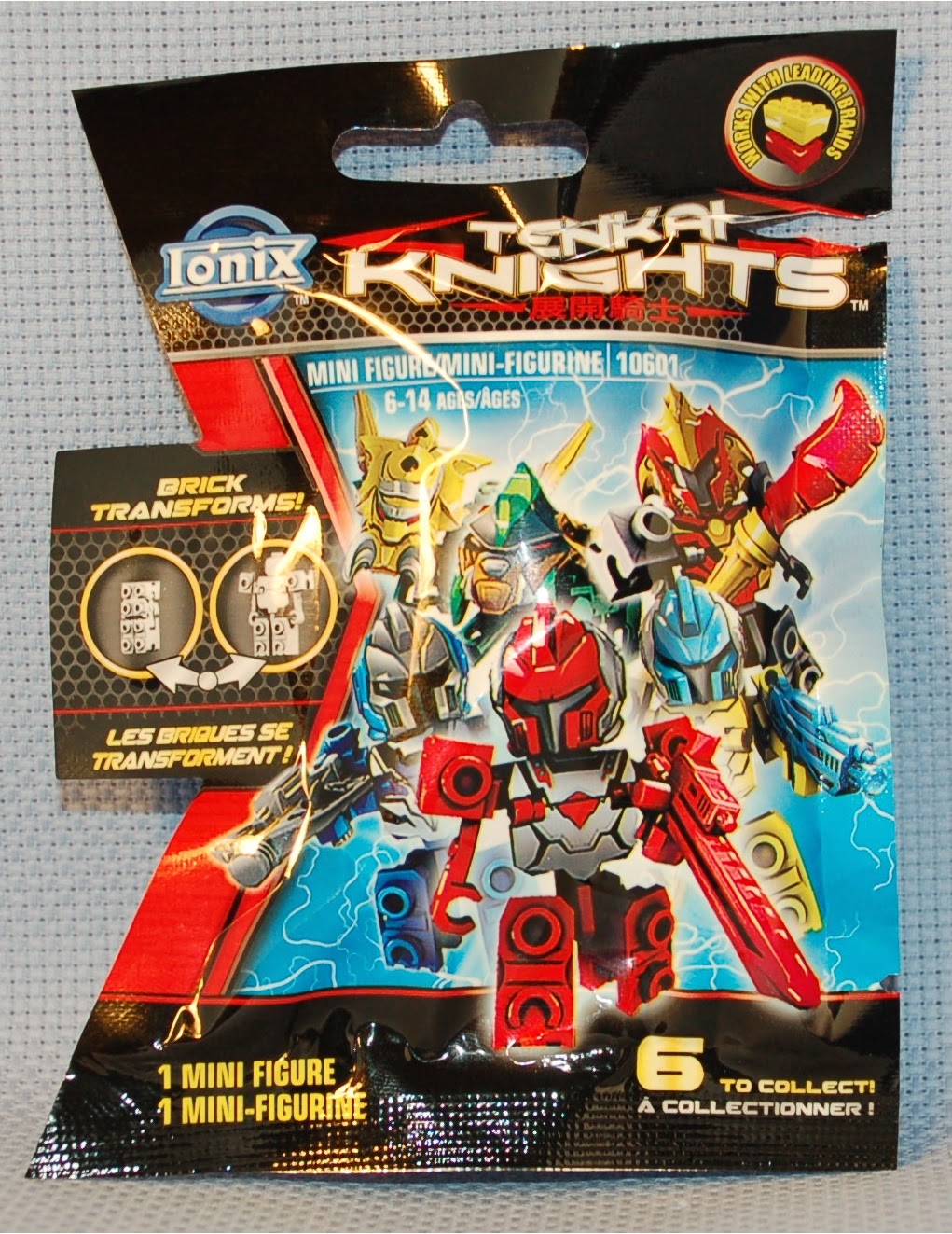 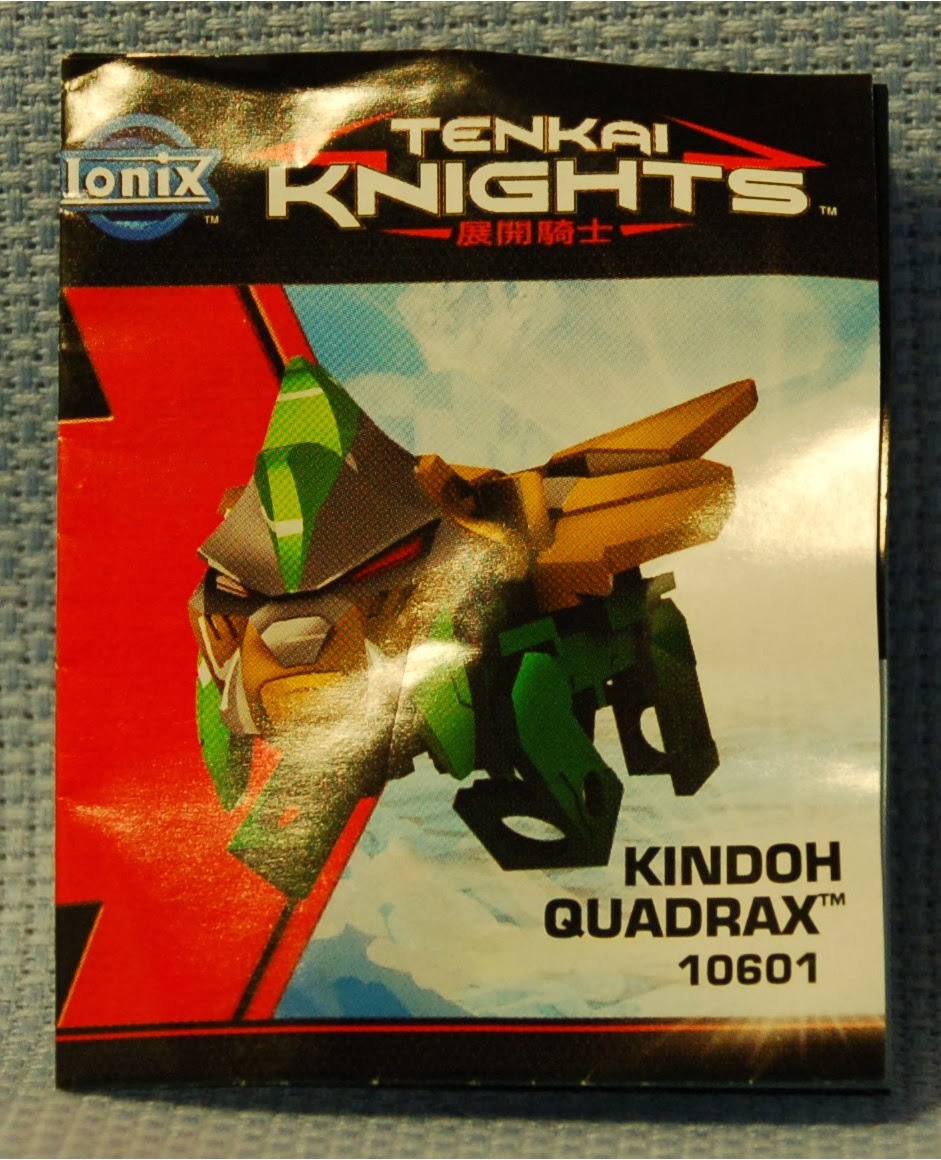 Yup, that's all the pieces in this one Tail, body, and head.  That's all you get.  I'll be able to use the head and tail but I have no idea how I'm going to use that brick.

Let's get a closer look at that brick.  I'll admit that it is an incredible piece of engineering. 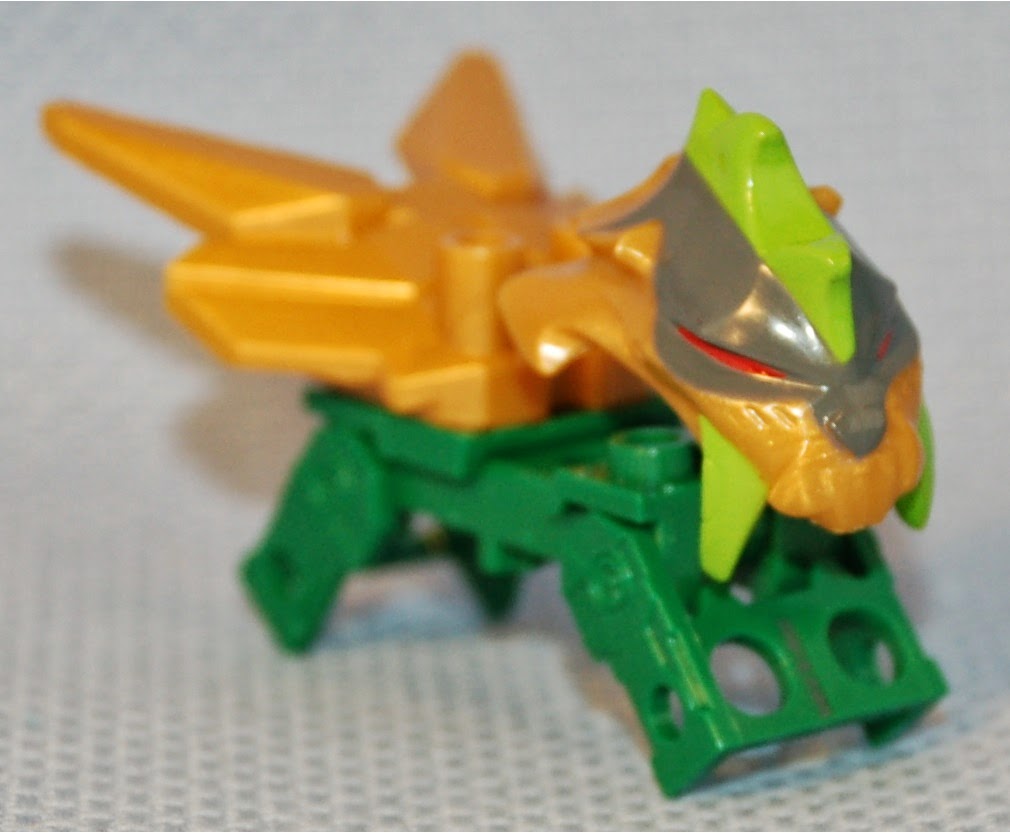 Here it is all assembled.

If you can't build a frame right away, or choose not to, does it have parts you should be able to put into use right away?  Yes.  (+5)
Does it have more than a handful of immediately useful parts?  No.  (-5)
Score: -5 (B-).  Don't let the score fool you, these are horrible deals.
Posted by Mantisking at 6:49 AM No comments:

We finish the week with a set I picked as being a "Good Set For Parts".   Is it odd that all three sets this week started with the letter "B"?

The instruction book once again contains more information than a usual one.  It's also thicker than the ones from the last two sets I reviewed combined.  Not surprising since it's older than both locations combined. 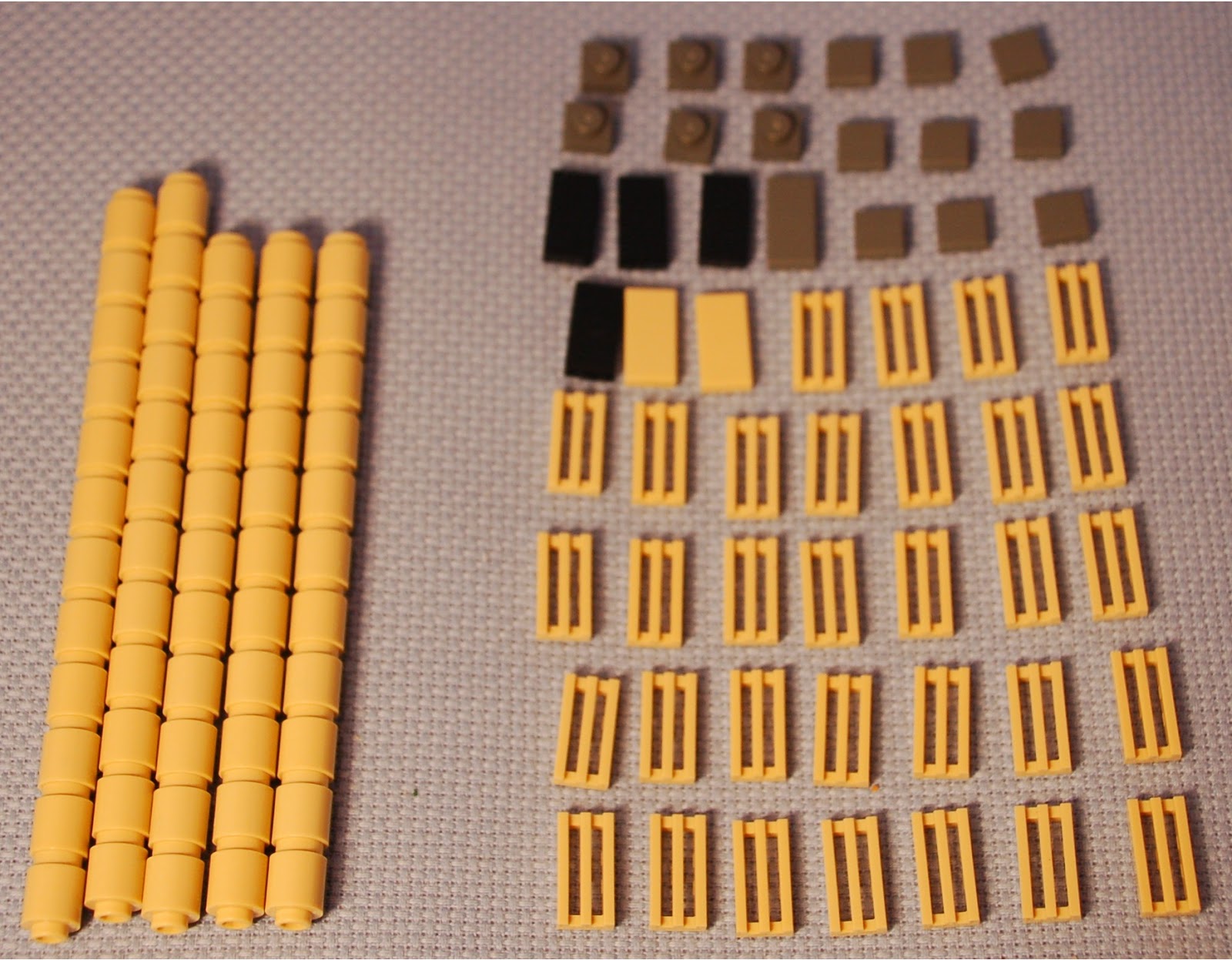 Parts 4.  Down in the lower right, Travis Bricks!  The 2x2x2 Cone Brick is pretty neat.  Then you have a bunch of Plates and Bricks.  Not a bad selection in this bag.

The Questions:
Can you build a frame, or frames, right away?  You might be able to, but it would be very blocky.  You definitely should be able to make some terrain and a decent Station right out of the gate.  (+0)
Is it below, at, or above the golden ratio?  At retail price, below.  (+5) (The Golden Ratio is $0.10 per part.)

If you can't build a frame right away, or choose not to, does it have parts you should be able to put into use right away?  Yes.  (+5)
Does it have more than a handful of immediately useful parts? Yes.  (+5)
Score: +15 (A).  It's a good a set.  It has a lot of Tan pieces and a handful of Travis bricks.  You could make a building for use as terrain in your game if you're going for a Giant Robot scale game.
Posted by Mantisking at 6:51 AM No comments:

Here we go with another Architecture set review.  This retails for $24.99, which means the price per piece is $0.12.

Like my review earlier this week, the instruction booklet is longer than the one for a regular set.

Parts 1.  A bunch of plates and tiles, including the name plate, and those funky tri-lobed plates which can make fun mecha feet.

Parts 2.  Another bunch of plates and tiles, along with two Technic Half Bushings, a bunch of Antenna 1x4, and two Bar 6.6L w/Stop Ring.

If you can't build a frame right away, or choose not to, does it have parts you should be able to put into use right away?  Yes.  (+5)
Does it have more than a handful of immediately useful parts? No, not really.  (-5)
Score: -10 (C+).  It's not that great a set.  It's expensive for what you get.  You could make a building for use as terrain in your game if you're going for a Giant Robot scale game.
Posted by Mantisking at 6:50 AM No comments:

Let's change gears a little this week and switch over to Architecture sets from the Lego Company. 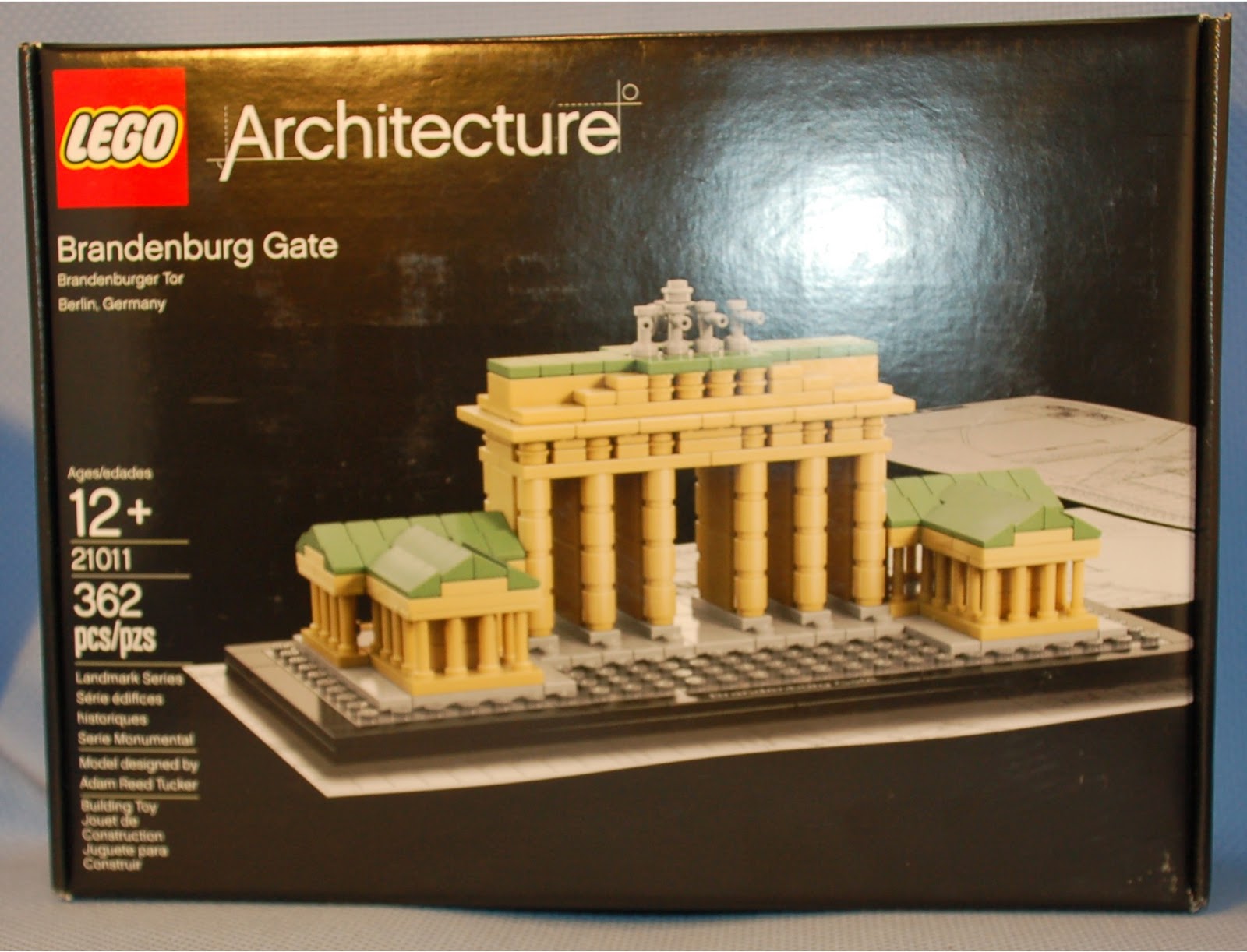 The instructions.  These are a little different from the instructions in regular sets.  They feature a background section on the building featured in the set and a small interview with the set's creator.

Parts 1.  A bunch of plates and a couple of bricks.

Parts 2.  Look at all those Sand Green cheese slopes. 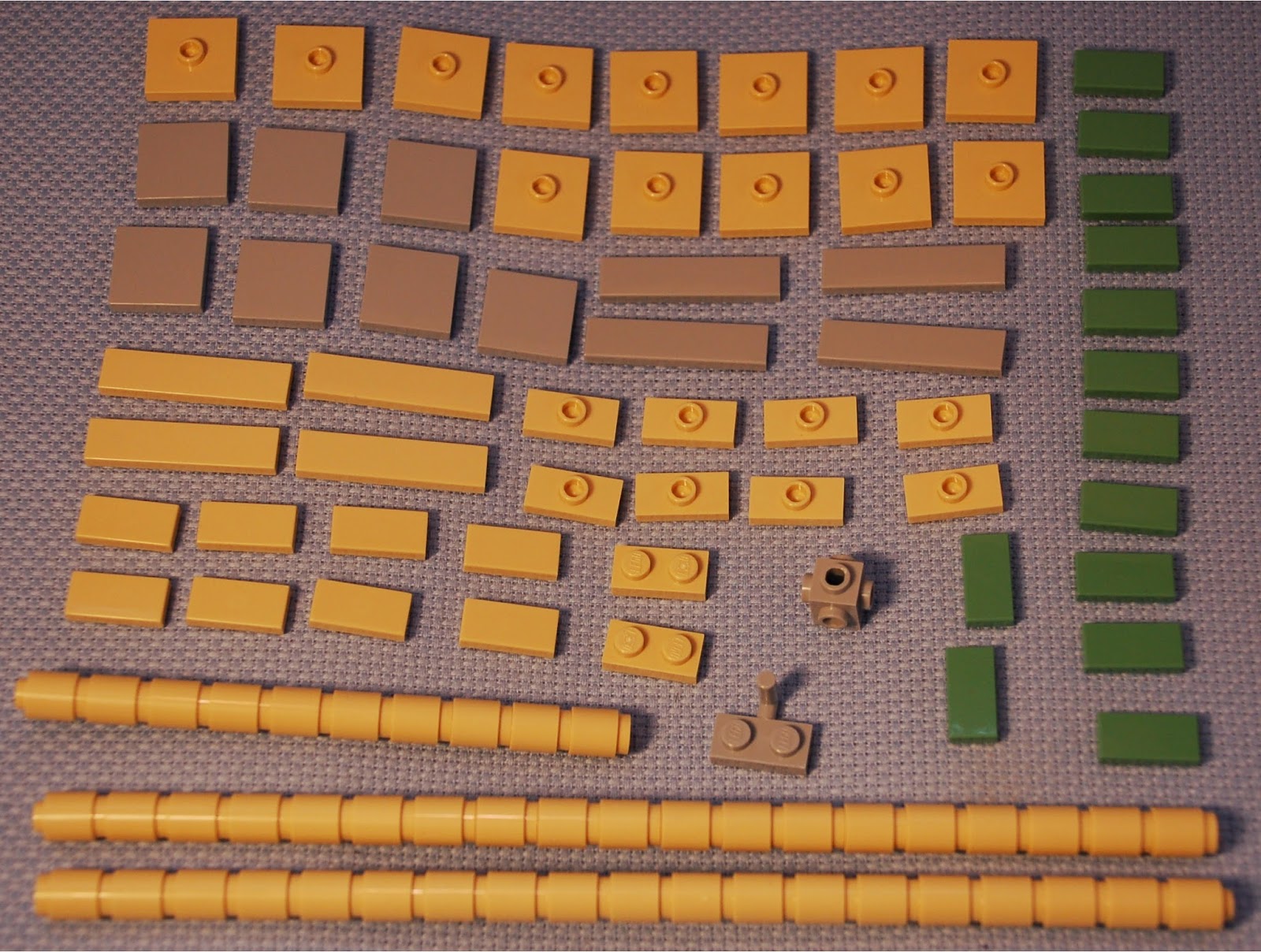 I see one Travis Brick, one Plate 1x2 w/ Arm Up, a bunch of 2x2 jumpers, some normal jumpers, lots of tiles in multiple sizes and colors, and a lot of 1x1 Round Bricks. 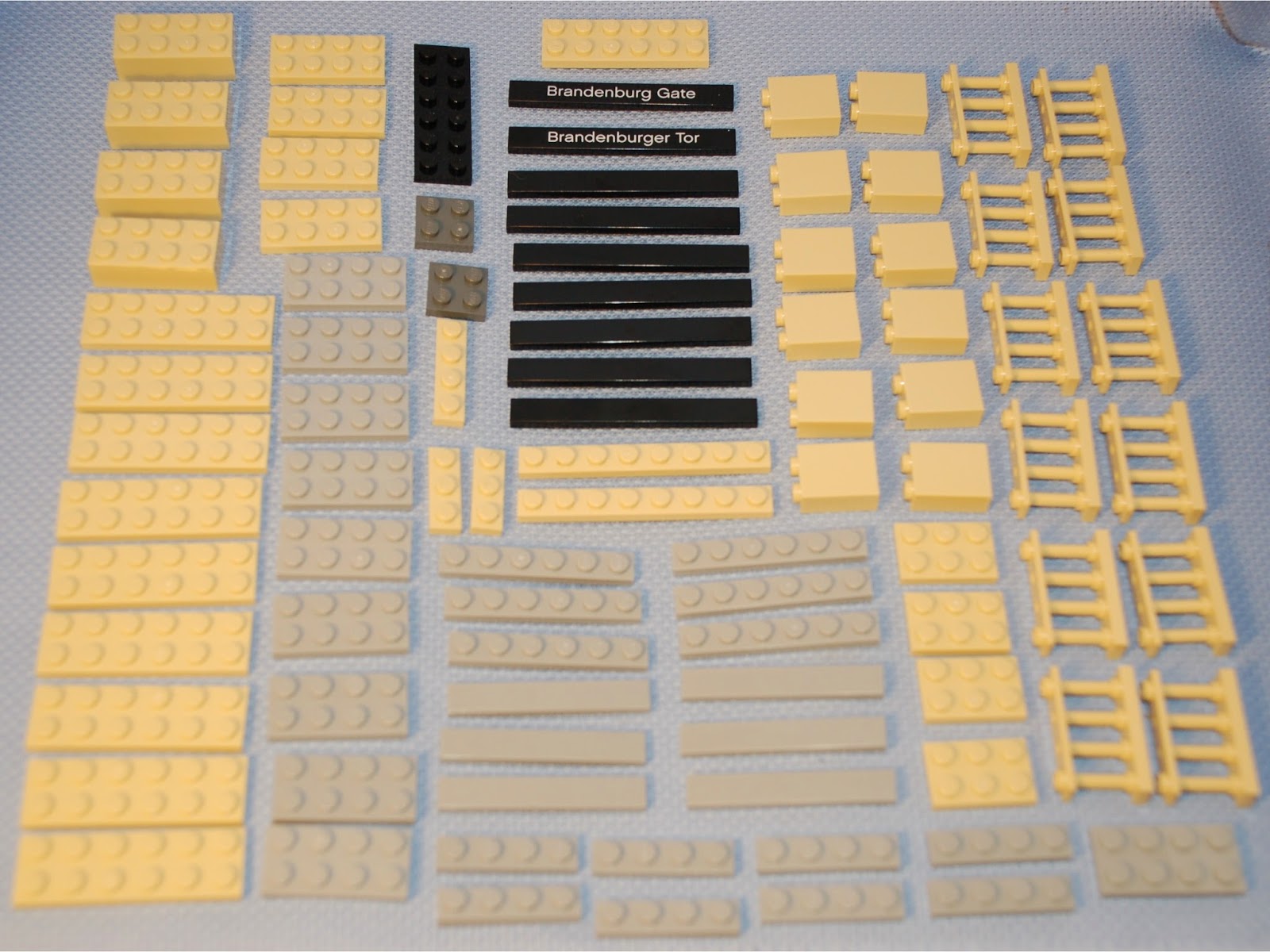 Yeah, that's a lot of parts.

If you can't build a frame right away, or choose not to, does it have parts you should be able to put into use right away?  Yes.  (+5)
Does it have more than a handful of immediately useful parts?  I'm not sure.  There's a lot of small parts you can use, but there's also a lot of medium and large parts you might not use right away.  I'll be generous and say yes.  (+5)
Score: +15 (A).  It's a nice set.  There's a lot of Tan and Sand Green which you don't see that often.  You could also make a nice building for use as terrain in your game if your looking for a slightly larger scale than the normal 7P.
Posted by Mantisking at 6:58 AM 3 comments: