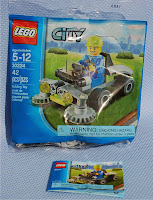 The parts.  Wheels, lampholders, the Technic brick, the Technic Axle & Pin Connector, the Technic 20 tooth Gear, and the Lime Green parts are of most interest to me.


The Questions:Can you build a frame, or frames, right away?  No.  (-5)Is it below, at, or above the golden ratio?  At.  (0)If you can't build a frame right away, does it have parts you should be able to put into use right away?  Yes.  (+5)Does it have more than a handful of immediately useful parts?  No. (-5)Score: -5 (B-).  It's a decent polybag with a bunch of parts I really like.  If you can get it on sale and drop the PpP below the golden ratio it would score a B.

Posted by Mantisking at 6:56 AM No comments:

Another small set that can be found at Target in the checkout aisles.  $3.99 for 28 pieces.  Shades Corvid has already done a review but, we came to different conclusions.

This is the package and the instructions. 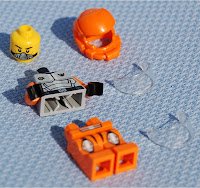 The minifig.  One of these days I'm going to have to put all of these minifigs to good use.  In the meantime I'll settle for using the helmet in a build.

The parts.  Four Robot Arms, an Octagonal Bar Plate, an Inverted Plate, and a handful of other fun pieces. 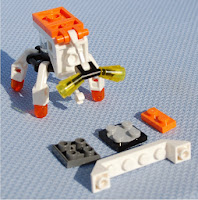 Here's the frame I built and the left-over pieces.

Score: 5 (B+). While you can build a small frame, you will still have to use more of your own parts for attachments.  Not quite as good as the Umbarran MHC polybag, but still quite useful

Pascal is a prolific and talented builder who's Flickr stream literally runs on for pages.  Let's look at some of his work.

COG.  The first creation of his that got my attention.  I built a pair of these myself.  They're very sturdy.  You could probably toss them against the wall without breaking them.

Grunt Mk.1/Mk.2.  His first attempt to create a "generic" frame similar to the Chub.

Groundhog.  The second of Pasukaru76's attempts at a "generic" frame.

Black Widow Company.  A bunch of Battletech mechs in microscale.  These are not his only ones.  Seek them out.

Shorty Mk.2  The third of Pasukaru76's "generic" frames.  MittenNinja built a squad of these recently.

Reinventing the Wheel.  A recent creation -- small, but full of personality.


You really should look through his photos, he has a lot more than just mecha.  He really needs to sort them better though.  Just sayin'.
Posted by Mantisking at 12:42 AM No comments:

Here's the second half of the battle that occurred back in April.
Turn 4 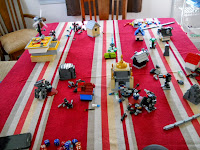 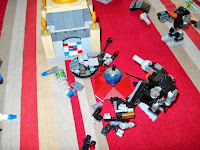 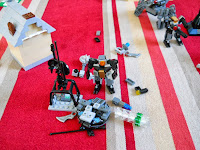 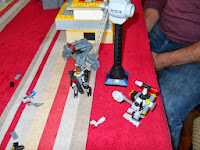 The battle consistently gets worse for me.  I lose a station and another Death Drone.  Tom begins to assert his will on the battlefield. 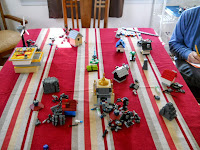 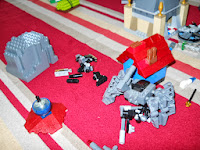 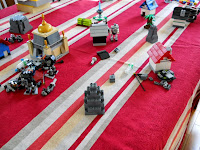 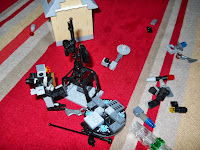 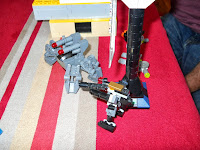 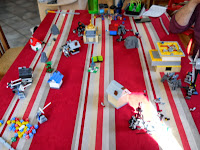 And here we are at the end.  I'm left with two frames and one station, Stevenik has two frames and two stations left, and Tom rules the roost with four frames and three stations.  Lessons?  Have a plan and stick with it.  Don't choose your squad right before the game starts with no idea on how they might be best used.  I still have fun playing even when I lose.

Posted by Mantisking at 6:22 AM No comments:

I managed to get in a game back in April -- hence the post title -- against my friend Stevenik and new friend Tom.  Let's be plain about this.  I got my ass kicked.  I tried out a new team and I did not set up all that well.

Stevenik started out as Primary Defender, I was Primary Attacker, Tom was somewhere in between. 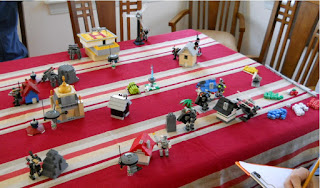 As you can see we all started pretty spread out over the table.  We all had five frames, just differing amounts of attachments. 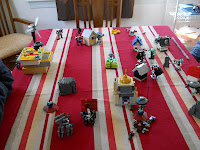 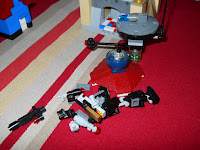 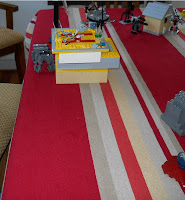 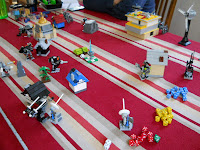 Here's the aftermath of the first turn.  Stevenik has lost one frame and I've re-taken one of my stations. 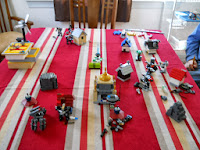 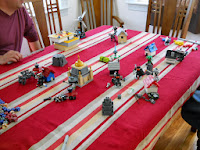 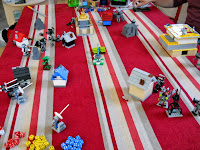 Aftermath of turn two.  As you can see in the last picture, there's beginning to be a pile-up by one of Stevenik's stations.  I've lost one of my Death Drones and forces have shifted on the field of battle. 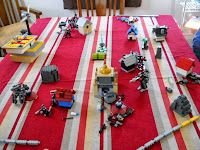 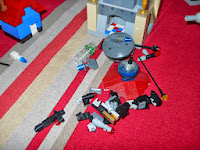 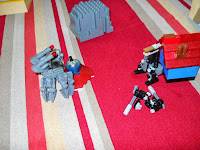 Stay tuned for the next entry to see how the battle ended.
Posted by Mantisking at 12:10 AM No comments:

Here's another set of non-human mechs for you to ogle to finish out the week.

Wind Up Drone by rope fish.  We'll start out with a render.  Unfortunately this one looks like it won't stand up on its own.

Assault Cyberinsect by Garry_rocks.  Another render by the prolific Garry_Rocks.  Nice use of the Hero Factory head. 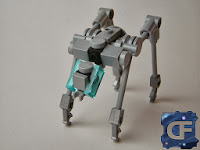 Nanotech Silberfisch by Dead Frog Inc.  Vaguely skeletal and definitely robotic.  Nice.  I can see a couple of possible attachment points for weapons. 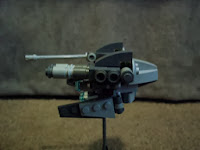 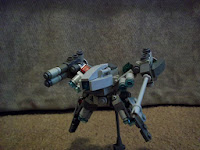 Strike Suit One (side) by rope fish.

Strike Suit One (strike mode) by rope fish.
This one's kinda pushing it.  While it does transform, the Strike Mode is roughly bipedal humanoid.  Still, there is a bit of a fetish in the community for transforming mechs.
Posted by Mantisking at 6:55 AM 1 comment:

Welcome to the giant edition of GSfP.  No, not because of how many sets we have but, because of how big the sets are!  I was going to post this later in the month, closer to the six month mark from the last GSfP post, but it is Bricktober and there are generally good sales during the month.  Hopefully you can get some good deals on these and other GSfP choices.

Once in a while certain frames will grab your attention. It happened first to me with the Classic, and then with my Crab Mecha, and also with my Hecaton frame.  Now it's happening again with my Drache Ei frame.  It's not just the build, even though I'm having fun building using only Kre-O pieces.  I'm developing a background for these frames and that is weaving its way into tiny details in how I build each one.  I'm having a lot of fun building these and thinking about how each design comes together.  I've actually put together a full squad.

As you can see there are now four different variations.  There's the base model, the "C" variant, the "A" variant, and the "S" variant.  Each one has minor variations in the build that sets them apart beyond the attachments. 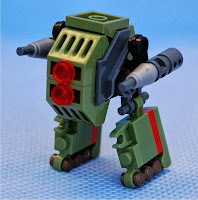 
The only thing I really need for these are more 1x2 plates in different colors to tell the difference between the unmodified versions, and Single Shot Rockets.  Although I have an idea of what I'm going to use for SSRs.
Posted by Mantisking at 10:02 AM 4 comments:

This is it, the one you've been waiting for.  Carpemortis has already done a review on the Hangar.  Ever since the community found out about this set we've been talking about it.  Before we even get to the questions you can see that it's essentially an Ijad frame in a bag.  $4 gets you a frame, $20 gets you a squad.  Darksyntax has also started a topic to show off different builds using this set.  As you can see -- if you click through -- a lot can be done with this set. 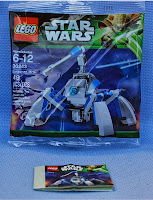 The bag and instruction booklet.


The Questions:Can you build a frame, or frames, right away?  Yes.  (+5)Is it below, at, or above the golden ratio?  Below.  (+5)If you can't build a frame right away, does it have parts you should be able to put into use right away?  I'd say yes.  (+5)Does it have more than a handful of immediately useful parts?  Yes. (+5)Score: 20 (A+). Our first Lego set with a top rating.  Run out and grab this one before it disappears.
Posted by Mantisking at 6:57 AM 7 comments:

Here's a review of a Kre-O polybag that I stumbled across recently.


The bag, instructions, stickers, and the insert all Cityville sets come with.

The eponymous microfig.  I'd like to use that torso section in a build but I'm not sure how yet.  And one of these days I will have enough of those "Kre-O" bricks to build a piece of terrain.

The parts.  I could actually post something here, but we all know the only thing anyone is going to see is that weapon in the lower left corner. It can be held or clip on to a bar.

The Questions:Can you build a frame, or frames, right away?  Kind of.  While the package does show Dr. Mayhem riding some sort of proto-frame, this wouldn't really cut it in a MFZ game.  (-5)Is it below, at, or above the golden ratio?  Just slightly above.  (-10)If you can't build a frame right away, does it have parts you should be able to put into use right away?  Oh yes.  (+5)Does it have more than a handful of immediately useful parts?  Yes. (+5)Score: -5 (B-).  It's a fun polybag with a big gun and neat parts.  Regular price is $3.99 so grab it on sale if you want this.  A sale that drops the PpP to the Golden Ratio or below would raise the score to +10 (A-).
Posted by Mantisking at 6:49 AM No comments: