Since I had a little time before the last game started, I took a shot of the empty table. 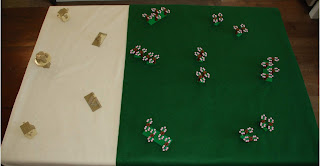 Now, let's look at the table with all the player's pieces set up.

Doesn't look quite so empty does it?  This is what I was talking about in point number three of the Terrain Primer post.  The small tree clusters cover 2.34", the large ones 9.38".  The wall sections cover 7.03", the Moai cover 3.5", and the tower covers 1.56".  That all totals up to 69.48".  Subtract that from the total area of the battlefield leaves us with 2096.52".  Which, astonishingly, leaves 97% of the battlefield open.  A shorter, square battlefield (38" x 38") would have had a total area of 1,444".  With terrain that would have left us with 1374.52" of open space.  That table would be 95% open space.  Which is a long way of saying that (Total Table Area - (Total Pieces of Cover * Total Area of those Pieces)) = a variable that really can't be planned for unless you play on the same table constantly.  Also, as long as all the players are happy with the amount of cover on the table does it matter how much area it actually covers?

Also, this set up "violates" the formula I put forth in point number two of that blog post as well.  The wall sections take 2 Hits before being reduced under the Height Minimum for Cover.  Each individual tree will take 3 Hits before being destroyed.  The Moai and the tower take 5 Hits before being destroyed.  So the light cover is only 6% of the total, the medium cover is 85%, and the heavy cover is 9%.  I'm not sure if that is reflected in the fact that only three pieces of Cover were damaged through the entire game.  That is something that I'll have to research in my battle reports.
Posted by Mantisking at 7:32 AM