Last year I hopped on the Zizy vehicle bandwagon.  I'm returning to those vehicles because I have this idea for a table-setting that involves cars and because I'm on a creative streak.  This time around I took it in a different direction and went civilian. 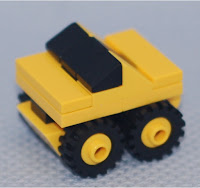 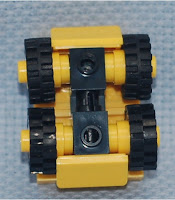 I also figured out a way to make a shorter, four stud long vehicle.  This one involves sticking a Friction Pin between the two Travis Bricks that form the axle.  It's loose but it prevents the axles from pivoting too far out of line.


One thing I've disliked about this design is the three stud width of the chassis.  This basically limits you to 2x3 and 3x3 Plates stacked on top of the 1x? Plate "spine" to form the body of the vehicle.  And looking at later builds from Zizy I see he's moved away from it too.

But, if we keep the same "axle" set up of three Travis Bricks linked by 1x1 Round Plates with 1x1 Round Bricks attached we can attach that to a 2x6 or 4x6 Plate in the same manner it attached to the 1x6 Plate.  Except this time it's easier as we're inserting into anti-studs as opposed to clicking into the mini-bar pieces that are on the bottom of some Plates.


This allows us to make vehicles that are a little sturdier, with lower part counts, and can be made with more common pieces.  It also allow us to make vehicles of varying widths, 3x and 4x, to make our scenery a little more varied for a better looking game table.  Also, as you can see from the pictures above, you can use standard Lego wheel arch pieces.
Posted by Mantisking at 7:46 AM